Chris Ashton 'privileged' to be back in England team 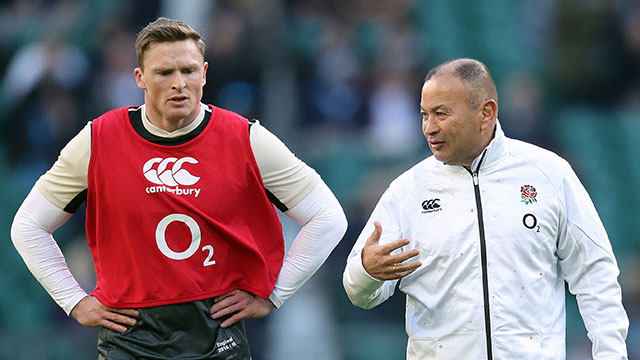 Chris Ashton will enjoy his first Six Nations start since 2013 recalling that a year ago he was resigned to having played his last game in the Championship as he worked as a TV analyst.

Ashton has displaced Jack Nowell from the right wing for England's round-two fixture against France with Eddie Jones explaining the decision by stating "we think he might sneak us an early try".

It continues a Test rebirth that began last autumn, his return to these shores after a successful season-long spell at Toulon propelling him back onto Jones' radar.

The 31-year-old reaches another milestone on Sunday when he will further distance himself from the four years spent marooned on 39 caps.

"I went with (former South Africa wing) JP Pietersen to commentate on France against Italy," the Sale star said.

"At that time I'd never have thought we'd be sat here with me about to play France.

"When you're younger and you're in the team, you never think it's going to be your last game.

"You think you're going to have good, long years at it, but that wasn't the case for me.

"I definitely understand what it's like to not be involved and not have the shirt, so it's a big privilege for me to be back in.

"Of course this is what I came back to England for. I got a taste of it in the autumn so I'm past that point of it being a relatively new environment."

Ashton's last Six Nations outing was one of the low points in English rugby history - a crushing 30-3 defeat by Wales in Cardiff that destroyed the team's Grand Slam hopes at the final hurdle.

"It was a long time ago - and one to forget as well," the dual code international said.

"I've had a good few years watching the Six Nations, it's such a great tournament, and England have done really well over the last three years, taking out last season.

"I've had to sit and watch that so I'm just happy to be part of it again."

Nowell impressed through his work-rate and carrying in the remarkable 32-20 victory over Ireland a week ago, but it is Ashton's nose for the line that has proved decisive for the visit of France.

"You have to show an unrelenting desire to want to play for your country, which Chris has done," said Jones, in reference to Ashton's decision to sign for Sale in order to revive his Test career.

"He brings us something different that we think is going to be valuable at the start of the game - he's a try poacher."

In the only other change to the starting XV, Courtney Lawes replaces knee injury-victim Maro Itoje in the second row with Joe Launchbury offering cover from the bench.

England produced their best performance of the Jones era at the Aviva Stadium, but captain Owen Farrell hopes it is merely a stepping stone to greater achievements.

"We know we can do better. We want to see where we can take things," Farrell said.