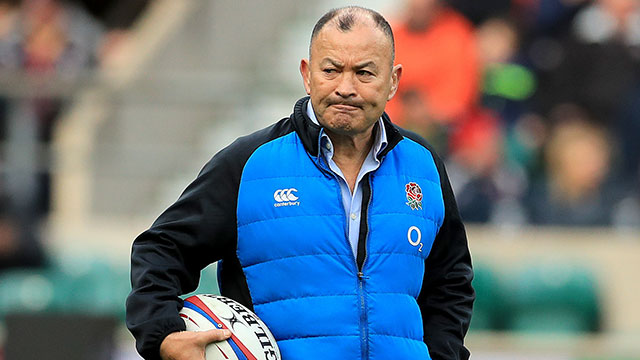 England head coach Eddie Jones says he has a score to settle with Scotland next week after their overzealous celebrations of 12 months ago.

An eight-try, 57-14 win over Italy means England could still claim the Six Nations title, if Ireland can overcome Grand Slam-chasing Wales in Cardiff.

Jones' side will be seeking to reclaim the Calcutta Cup lost in 2018 in Murrayfield, which was followed by unsavoury abuse of the England boss at a Manchester train station by Scotland supporters.

Jones later admitted he no longer felt self to travel by public transport and felt pre-match comments from Gavin Hastings - the former Scotland captain said Scotland would love nothing more than "to rub Eddie Jones's face in the dirt" - were contributing factors to the disgraceful behaviour.

"We'll rip into training and be at our absolute best next week, because we're going to have to be to beat Scotland," Jones said at Twickenham on Saturday.

"We know that's their game of the year. We saw how they carried on last year after they beat us. So, we might have short memories sometimes, but sometimes you have longer memories."

Jones declined to elaborate, saying: "I just remember everything that was being said. That's all I have to say. I don't have to recite what's been said."

Jamie George, Jonny May, George Kruis and Dan Robson also scored tries for England, who bounced back from their 21-13 loss to Wales in Cardiff two weeks ago.

Rarely short of confidence, Jones was even critical of his own performance at the Principality Stadium, but pleased with the response against Italy.

"I don't think I coached the side very well against Wales and I take responsibility for that," he added.

"Did I doubt myself? Probably not. I was filthy about the way I coached. I didn't coach well.

"I let the players down. It was good to see we got together, worked hard and got ourselves right for this game."

Tuilagi was in devastating form, while Joe Cokanasiga also impressed, although Jones would prefer a more conservative approach to handling from the Bath wing.

Jones added: "He did some good things. The one-handed stuff's great for you guys, but possibly he could carry with two hands at other times.

Tuilagi showed why he is being linked with a lucrative move to the French Top 14 after the World Cup, which would make him ineligible for England.

Jones added: "We've taken his passport. So he's not going to France in the next week. I've got it in my pocket."

Italy head coach Conor O'Shea insisted his side are better than the result suggests and can finish on a high by beating France in Rome next week.

He said: "Sometimes you can over analyse things. We were overpowered. And they're an unbelievably powerful side.

"They were a hurting side. But they're the best side in the Six Nations, in my opinion.

"With the ball we caused problems and showed some really good moments in the match and we could've had more out of the match, instead of the couple of tries we got."

Talismanic captain Sergio Parisse is optimistic of shrugging off a hamstring problem to play in what could be his final Six Nations game.