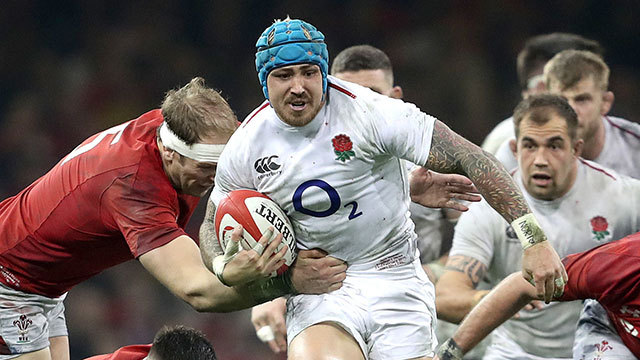 Maro Itoje and Jack Nowell (pictured) will be given every opportunity to prove their fitness for England's Six Nations showdown with Italy at Twickenham on Saturday.

Itoje suffered an injury to the same knee damaged in the Championship opener against Ireland on February 2 when performing a forwards drill in training on Tuesday.

Charlie Ewels is on standby to replace the Lions lock if he fails to recover in time with Joe Launchbury and George Kruis forming the starting second row partnership.

Nowell has been struggling with the shoulder stinger incurred in the opening two minutes against Wales and is also a major doubt ahead of Thursday morning's team announcement.

Should he succumb to the injury, bulldozing Fijian-born wing Joe Cokanasiga will step up from the bench and into the number 14 jersey.

"We'll give Maro every chance to make the weekend. He's still got a good chance of making it," defence coach John Mitchell said.

"We're sensible enough to make sure the athlete's health comes first. There's no way that we want to create a setback for the athlete. But we'd like we'd like him to be there, he's a bloody good player.

"Jack took a shoulder knock in the first minute of the match against Wales. He's progressively increased his training all the way through and again he's in a position to be considered.

"We'll make sure his health is not at risk when we do make that decision."

England remain in title contention despite their 21-13 defeat in Cardiff with bonus-point wins in the opening two rounds leaving them just two points adrift of Grand Slam-chasing Wales.

Italy have not won a Six Nations match since 2015 in a run spanning 20 Tests and have been unable to secure even a losing bonus points so far in this Championship, but Mitchell views them as dangerous foes.

"We're very mindful of the fact that they beat South Africa in 2017. They come with quite a lot of unpredictable attack," Mitchell said.

"In saying that, I enjoy the way they play. They're very possession based and with that variety in attack. They challenge you by playing with freedom."