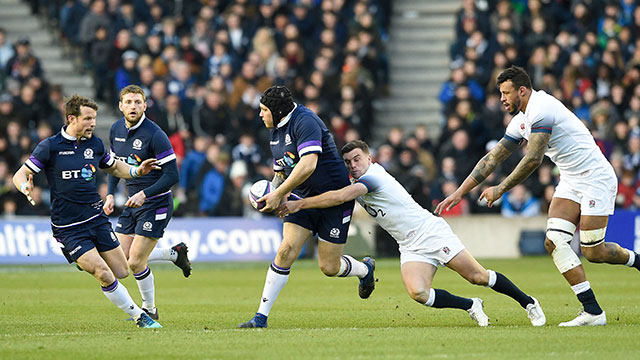 George Ford insists England have resolved to do their targeting on the pitch but will still be ready for anything when Scotland visit Twickenham on Saturday.

Twelve months ago Ford was roughed up and verbally abused by number eight Ryan Wilson as the teams filed through the tunnel at Murrayfield upon completing their pre-match warm-up in an incident that still riles Danny Care.

"It wasn't really tunnelgate, it was more push the smallest lad in the team in the back," said Care, who started the 25-13 defeat at scrum-half.

Owen Farrell, Ford's long-standing friend, rushed to confront Wilson and had to be restrained. Both players escaped sanction for the incident.

Eddie Jones has promised Scotland a physical reception at Twickenham as revenge for the treatment in Edinburgh and Ford echoes his head coach by declaring England will let their play do the talking.

"Obviously there was a little incident before the game last year. You'd be surprised - more of that goes on than you think," Ford said.

"On that occasion, it just happened to be as we were walking down the tunnel. Any team would try anything to get an upper hand or to put the opposition off. So there's nothing new there.

"We'd rather do it when the game has kicked off, of course we would. And there are a few ways you can do that - tactically by being smart, or physically within the laws.

"So there are a few ways to do it but when the whistle goes, that's when the action counts.

"When you get two passionate nations who come together to play an intense Test match with a fair bit riding on it, you're probably going to get instances like the tunnel.

"The main thing for us is to focus on ourselves so that if anything like that does crop up before the game or during the game, we can always come back to being controlled and to imposing our game plan on the opposition.

"One of our main disciplines, and we practice it every day in training, is to recognise what is going on and recognise what we need to do to stay on track."

Ford, who has yet to make a start in this year's Six Nations but could be restored at fly-half on Saturday, accepts that as a playmaker he will always be in the crosshairs.

"The opposition are going to try and do everything they can to put you off the game," Ford said.

"The 10 plays such a pivotal role in terms of running the team and making decisions constantly, so of course you're going to be a target.

"The amount of times I've been at the bottom of a ruck and they've tried to put a hand in your face or an elbow in your face... things like that. Just to try and rough you up a bit. That happens in every game."

England will be crowned Six Nations champions if they beat Scotland and Wales fail in their Grand Slam bid against Ireland.