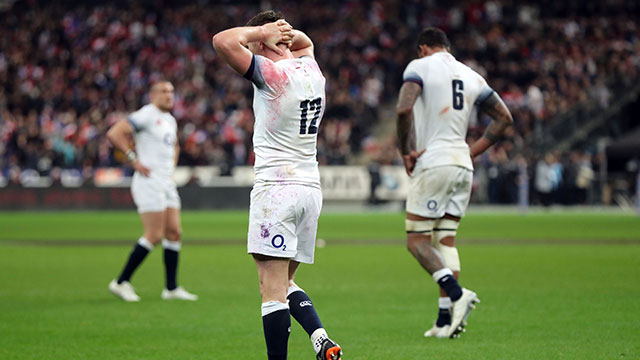 England surrendered their Six Nations title to Ireland with a round to spare after a 22-16 defeat by France completed their worst Championship performance since 2010.

Ireland's 28-8 victory over Scotland earlier in the afternoon left the deposed champions needing to win with a bonus point at the Stade de France to remain in contention heading into the final weekend, but scoring one try alone took 73 minutes.

The last time England engineered four touch downs on French soil was in 1992 and, with the breakdown nightmare that surfaced at Murrayfield a fortnight ago evident once again, they came apart in a tense encounter of low quality.

Hemorrhaging penalties at a debilitating rate and failing to make any meaningful impression on the home defence, their rule over Europe ended meekly with the Six Nations trophy that is destined for Dublin sat on the sidelines.

Eddie Jones' record as head coach now stands at 24 wins from 27 Tests, but two of those three defeats have come in the last two matches with Scotland and now France pointing to a team that has entered reverse.

Jones had completed the most radical team selection of his reign but the incoming Ben Te'o, Anthony Watson and Jamie George made little impact, while Owen Farrell was powerless as captain to reverse the mediocrity around him.

It was a penalty by Farrell that drew first blood only for holding on at the breakdown to force repeated intervention from referee Jaco Peyper.

Elliot Daly landed a super 53-metre penalty but soon after Nathan Hughes had to be carried from the pitch after taking a blow to a heavily-strapped left knee, before Maxime Machenaud and Farrell exchanged penalties.

Machenaud levelled Jonny May when the Leicester wing was running at full tilt as England struggled to make an headway, their early purpose seeping away as France drew level with two more penalties from their scrum-half general.

A key phase was unfolding four minutes after half-time as Mako Vunipola, Dan Cole and Joe Launchbury carried hard only for the increasingly influential Mathieu Bastareaud to claim a critical turnover close to his own line.

While England were found wanting, there was no such frailty from France in the 49th minute when a sharp attack reached its crowing point as Francois Trinh-Duc lofted a crossfield kick to the left corner.

Benjamin Fall came up with the ball but was tackled around the neck by Watson as he dived for the line, resulting in a yellow card and a penalty try being given by Peyper.

France were building a head of steam and somehow they butchered a huge overlap having initially escaped down the left wing, before wasting another chance to move out of sight.

Doubt hovered over the outcome when England produced their best attacking play that ended when Daly and May combined for the latter to touch down late on, before launching one final assault that fell agonisingly short.