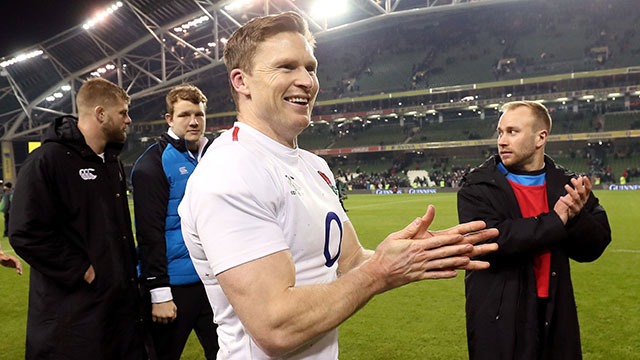 England have sprung a surprise by naming Chris Ashton in place of Jack Nowell for Sunday's Six Nations clash with France at Twickenham.

Nowell impressed through his work-rate and carrying in the remarkable 32-20 victory over Ireland at the Aviva Stadium but has lost his place on the right wing to Ashton, who makes his first Championship start since 2013.

Ashton is well known to France's players after spending a season at Toulon in which he set a new Top 14 try-scoring record of 24 touch downs in 23 appearances before joining Sale last summer.

"We have gone for Chris Ashton on the wing because we think he might sneak us a try early in the game," head coach Eddie Jones said.

"Jack Nowell was brilliant against Ireland and he'll play a significant role for us off the bench."

The second change to the starting XV sees Courtney Lawes partner George Kruis at lock after Maro Itoje was struck down by a knee injury in Dublin. Filling the vacancy on the bench created by Lawes' promotion is Joe Launchbury.

Itoje was expected to be missing until the final rounds of the tournament but Jones revealed he back sooner than expected from his grade two medial ligament tear.

"It's unfortunate Maro is injured but he has been rehabbing well so we are hopeful he will be back earlier than maybe first predicted," Jones said.

"We have got great depth in the squad so Joe Launchbury and Courtney Lawes will fill his shoes very well."

Apart from the presence of Nowell and Launchbury, there are two more changes to the bench in the shape of props Dan Cole and Ben Moon who have displaced Harry Williams and Ellis Genge.

Neither flanker Brad Shields nor winger Joe Cokanasiga have made the matchday 23 despite recovering from respective side and knee injuries.

England made a stunning start to their Six Nations title quest by dismantling Ireland against the odds, but Jones views France as unpredictable opponents as illustrated by their defeat to Wales in which a 16-0 half-time lead was surrendered.

"After Dublin we have had to refocus and reset. Players have been very good and certainly by Sunday we'll be at our best," Jones said.

"The French are always an interesting side to play against. They are full of talent and have a lot of unpredictability. It's hard to prepare tactically against them so we have had a real focus on ourselves.

"We can't wait to play in front of our supporters. I'm sure they will be buoyant by the first round results and we promise we will play a better game on Sunday."