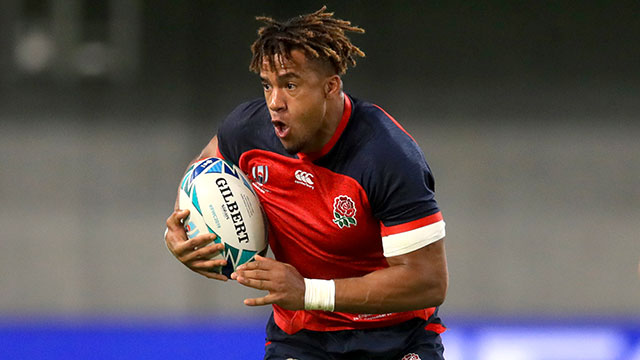 Anthony Watson will miss a second-successive Six Nations match after suffering a setback in his recovery from a calf problem.

The England wing has been ruled out of Saturday's Calcutta Cup showdown with Scotland following an aborted return to training on Tuesday, pointing to the retention of George Furbank at full-back.

Watson suffered the injury on Champions Cup duty for Bath last month and - while he was pencilled in to start the 24-17 defeat by France that opened the Championship - he was forced to withdraw on the eve of the team announcement in Paris.

"Anthony has felt it a bit today (Wednesday). He's not going to train today so we won't consider him for Scotland," forwards coach Matt Proudfoot said.

"We'll see how he goes through rehab for the rest of the week. On the training field yesterday he felt it again, so we're just taking a precaution with that."

Losing Watson is a blow given England's back three has an unsettled look.

Furbank struggled on his international debut at the Stade de France, making a string of conspicuous errors, and would almost certainly have made way for Watson had his calf issue not resurfaced.

Elliot Daly had been first choice full-back since July 2018 but Eddie Jones sees his future on the left wing and - along with several of his Saracens team-mates on parade - he endured a quiet afternoon in Paris.

There will be one enforced change made to the starting XV for Murrayfield when the team is named on Thursday with Jonathan Joseph likely to deputise for groin-injury victim Manu Tuilagi.

England will persist with the experiment of playing flanker Tom Curry at number eight in the absence of Billy Vunipola, who will miss the entire tournament because of a broken arm.

Curry was a world player of the year nominee for 2019 due to a string of outstanding performances, including at the World Cup, but he made little impact against France.

Proudfoot, however, insists the 21-year-old needs time to learn the nuances of a tricky position.

"But we couldn't make the transition if we didn't understand Tom Curry's potential, where he can play and what he can do as a player.

"He is an impressive individual who has a great head on his shoulder. He's incredibly tough and is a true modern-day loose forward.

"The nice thing about him at eight is that he brings great balance to he rest of the loose-forward combination.

"He can bring a balance to the attacking and defensive side of it. Bar the nuances at the base of the scrum, which is a skill I can coach to make him better, I think he did well."

Charlie Ewels has the paid the price for England's below-par performance in Paris after being omitted from a 25-man squad to continue preparations for the Scotland clash.

Ewels was a starter against France but has been jettisoned completely with Joe Launchbury, who has recovered from a knee injury, taking his place.

No extra three-quarter cover has been called-up for Tuilagi, so wing Ollie Thorley will make his Test debut at Murrayfield, either as a starter or replacement.

Saracens flanker Ben Earl is included but is unlikely to be involved when Jones names his team to face the Scots on Thursday morning.