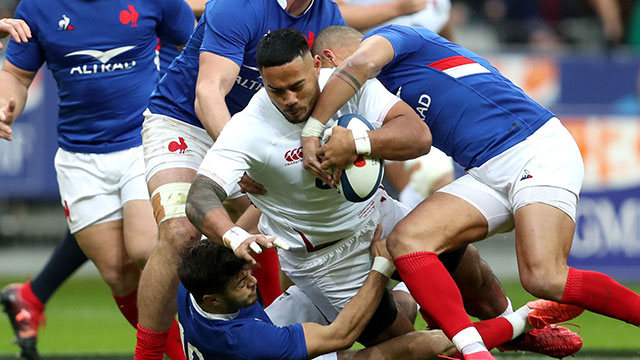 Eddie Jones has branded Scotland "niggly" ahead of a Calcutta Cup showdown that will be missed by Manu Tuilagi.

Tuilagi has been ruled out of the Six Nations trip to Edinburgh because of the groin injury sustained during last weekend's 24-17 defeat in France which kicked off their title quest in deflating fashion.

Jones promised "brutal physicality" in Paris in comments that backfired because of the controversy they caused across the Channel and the tame performance delivered on the pitch.

Undeterred, the head coach has taken early aim at Scotland by claiming that history shows they attempt to provoke England.

"Scotland are a niggly side. Our historical record against Scotland is interesting - over 80 per cent wins in England but only 50 per cent at Murrayfield," Jones said.

"It's about having good focus, good attention to the moment, good clarity about your game-plan, being well prepared. And we'll start with that today (Tuesday)."

Two years ago England were thumped 25-13 at Edinburgh in a defeat that exposed glaring breakdown deficiencies and launched a five-Test losing run that placed Jones' future in doubt.

When the teams walked through the tunnel to the changing rooms upon completing their warm-up, a brawl erupted that was provoked by Scotland number eight Ryan Wilson targeting George Ford, prompting Owen Farrell to defend his team-mate.

Asked for an example of "niggly" conduct, Jones replied: "The dressing-room scene two years ago when they tried to goad a couple of our players. And they were successful.

"Historically they've done that through the ages. That's the way they stay in the game and they're good at it.

"The Murrayfield environment helps them but you've got to be good enough to stay focused, be on task, do what you need to do.

"Composure is always important in rugby, but probably more so at Murrayfield."

Although Tuilagi will be missing against the Scots, his likely one-match absence is positive news.

Tuilagi lasted just 16 minutes against France to sounding alarm bells, given his career was once threatened by a serious groin problem and his recent setback with a similar issue that forced him to miss three games.

But significant damage has been avoided and Jones is optimistic the Leicester man will return for the rest of the tournament.

"Manu had his MRI scan (on Monday night) and he has a slight, low-grade adductor strain. We're hopeful he'll be fit for Ireland. It's very good news, outstanding news," Jones said.

Tuilagi's absence robs England of their most powerful player behind the scrum and his exit from the field resulted in a lack of firepower at the Stade de France, with Billy and Mako Vunipola already missing.

Jonathan Joseph came on as his replacement and is competing with Ollie Devoto to deputise at outside centre.

Anthony Watson was a late withdrawal from the team for the championship opener because of a calf issue but he is due to resume full training on Tuesday.