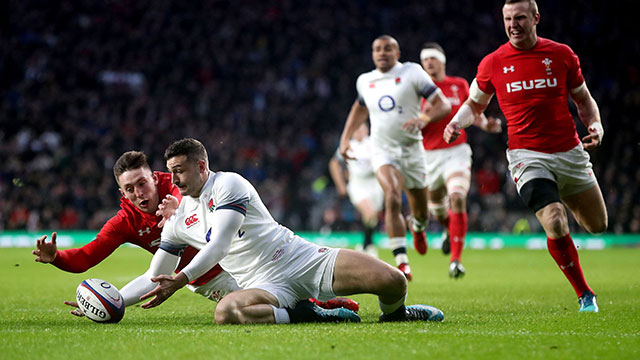 Jonny May ran in both tries as England kept their Grand Slam aspirations alive by edging Wales 12-6 in a brutally competitive Six Nations clash at Twickenham.

May crossed twice in the first half to help sweep the champions 12-0 ahead in the 20th minute, but Warren Gatland's men bravely clawed their way back into a captivating Test played in treacherous conditions.

Controversy clouded the result, however, after television match official Glenn Newman ruled out a try for Gareth Anscombe when Wales trailed 12-0 in the second quarter.

Anscombe appeared to exert downward pressure with an outstretched hand at the end of an attack down the left wing, but Newman thought otherwise and a key moment had fallen in England's favour.

The decision proved critical as a late penalty by Anscombe reduced their lead to six points.

It took a try-saving tackle from Sam Underhill to again deny Wales in a second half dominated by the visitors, who were missing seven Test British and Irish Lions including Leigh Halfpenny, a casualty before kick due to an unspecified injury.

Eddie Jones ignited the build when asking if Rhys Patchell had the "bottle" for the occasion and whether the mind games affected Wales' fly-half only he will know, but he endured a disappointing afternoon.

At one point in the second half the ball squirted unexpectedly out of his hands as he staged a counter-attack, summing up his afternoon, and he was replaced shortly after.

Opposite him George Ford, brilliantly assisted by Owen Farrell, excelled through his kicking, but it was the two defences that emerged with enhanced reputations after refusing to buckle.

Dylan Hartley departed for a head injury assessment after only 42 seconds but his exit failed to knock England off their stride as they surged ahead through a try founded on the vision of Farrell.

Anthony Watson challenged Patchell for a hanging kick and a slippery ball squirted out to Farrell who, spotting space on the left, delivered a perfectly-weighted kick for May to outrun three onrushing defenders and touch down.

Wales were met by a wall of white shirts as they sought to make an impression and it was Maro Itoje who forced a turnover with a thumping tackle, the prelude to the hosts' next try.

Waves of runners made ground and with the defence finally splitting the ball was sent left where Joe Launchbury burrowed forward before feeding an opportunistic May the scoring pass.

A Patchell penalty nudged the visitors off the mark after Anscombe's try had been disallowed and they entered a key phase as they attacked from a line-out, hammering away with success until a knock-on undid all their good work.

Like two boxers slugging it out, the rivals continued to exchange blows and it took the arrival of Jack Nowell from the bench - he had replaced the injured Anthony Watson - to get England moving forward again.

As play entered the third quarter a breathless series of turnovers unfolded and it took a try-saving tackle by Underhill on Scott Williams to keep Wales out.

Wales chucked everything at England in the closing stages, Anscombe's penalty adding to the tension, but the home defence held out.

MIKE BROWN: Owned the backfield in hellish conditions for a full-back. 8

ANTHONY WATSON: Limped off injured having been given little chance to shine. 6

JONATHAN JOSEPH: A better defensive option at 13 than Ben Te'o, and that was needed. 7

JONNY MAY: Ran in two tries, showing his lethal pace for the first. 8

GEORGE FORD: Ran through his full repertoire of kicks. Superb. 8

DYLAN HARTLEY: Emptied the tanks and finished battered and bruised. 6

JOE LAUNCHBURY: Magnificent afternoon from the lock who even managed a pop pass for May's second try. 8

MARO ITOJE: Led England's defensive onslaught, a force of nature in the tackle. 8

COURTNEY LAWES: Has yet to ignite since being moved to the back row. 6

CHRIS ROBSHAW: Finished up at number eight having given everything. 7

SAM SIMMONDS: Replaced at half-time after receiving treatment for an injured shoulder. 6

GARETH ANSCOMBE: Called up as replacement for Leigh Halfpenny, he acquitted himself well, being unlucky not poach a first-half try. 8

JOSH ADAMS: Was not fazed by the big Twickenham occasion in what was only his second Test match appearance. 6

HADLEIGH PARKES: Another solid contribution from the Scarlets centre, who continues to look comfortable at Test level. 7

STEFF EVANS: Could not get involved as much as he did against Scotland last weekend, but fared solidly opposite England star Anthony Watson. 6

RHYS PATCHELL: England boss Eddie Jones questioned whether Patchell had the "bottle" for a white-hot Twickenham occasion. A mixed bag, but some good moments. 6

GARETH DAVIES: Quick in deed and mind around the forward fringes, ensuring that England's back row had to watch him closely. 7

ROB EVANS: Another fine contribution from the Scarlets loosehead prop. Developing rapidly into a world-class performer. 7

KEN OWENS: Solid and dependable once more, he helped Wales gain at least parity during a fascinating scrum contest. 7

SAMSON LEE: Offers Wales reliability on the tighthead side of their scrum, and relishes being in combat with his Scarlets front-row colleagues. 7

CORY HILL: Growing in stature all the time, an easy to understand why Wales head coach Warren Gatland rates him so highly. 7

ALUN WYN JONES: Wales' captain led from the front, repeatedly showing up in the heat of battle. 7

ROSS MORIARTY: Excelled in the physical exchanges as Wales dominated the second half at Twickenham. 7

Replacements: Wales head coach Gatland made a number of second-half switches, and his replacements did not let him down, all rising to the challenge. 7