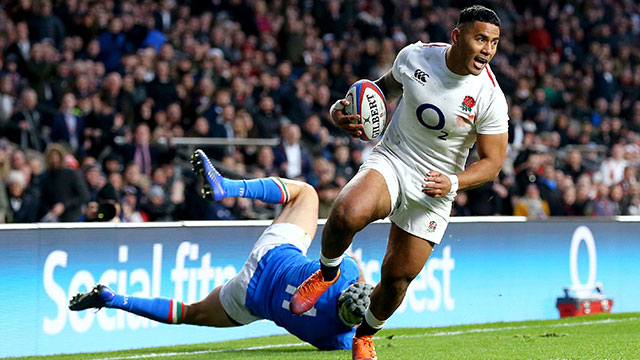 Manu Tuilagi led the onslaught as England kept up the pressure on Grand Slam-chasing Wales by overwhelming Italy 57-14 at Twickenham.

Tries by Jamie George, Jonny May, Tuilagi and Brad Shields sealed the bonus point in the 32nd minute to break Ireland's Six Nations record for the fastest produced by three minutes.

Tuilagi was a marauding presence until his exit in the final quarter and it was fitting that he followed up his first Test try for five years - his last was also against Italy - with a second soon after the interval.

Predictably enough, Conor O'Shea's men were overpowered with Tuilagi supported by the equally devastating Joe Cokanasiga, who set off like a freight train, faded and then finished explosively.

George Kruis, Dan Robson and Shields added final-quarter tries and it was a bulldozing run from man of the match Cokanasiga that enabled the replacement scrum-half to cross.

It was not until the 62nd minute that Eddie Jones decided to field Robson and George Ford and given the result was effectively sealed around the half-hour mark, it once again highlighted the reliance on Owen Farrell and Ben Youngs.

For England to now clinch the Six Nations title Wales must fall to Ireland in the final round next Saturday and Scotland must be swept aside in a bonus-point win at Twickenham.

They are well placed to capitalise on an upset at the Principality Stadium, while at the opposite end of the table Italy are playing to avoid the wooden spoon.

Aside from their resilience and occasional spells of effective rugby, there was little for them to salvage from their visit to London and the calls for a play-off for Six Nations relegation to be introduced will only grow louder.

The unusual sight of Billy Vunipola and Kyle Sinckler finding space with kicks lit up the opening minutes, while on the right wing Cokanasiga sent Azzurri defenders flying with a series of bullocking runs.

Italy's scrum was squeezed into giving a penalty and when England opted for the line-out, they drove over through George in the eighth minute.

The scripted start was interrupted when Tommaso Allan slipped between Joe Launchbury and Cokanasiga to wriggle over, ending waves of Azzurri attacks, but the response was swift.

Elliot Daly danced into space, evading flailing tackles as he went, and drew full-back Jayden Hayward to provide May with a simple run in.

Whereas Daly used footwork to create the opening, it was brute strength that enabled Tuilagi to burst through some feeble defending and complete the race to the line.

Tuilagi's power continued to torment crumbling Italy and once again he forced a hole in midfield that created the opportunity for Shields to score under the posts.

The deluge of tries carried on in the second half as Tuilagi helped himself to his second after a long pass from George offered clear sight of the line, but the Azzurri were then rewarded for some fine play.

They retained possession to good effect as they attacked the line and when the moment came Allan sent Luca Morisi over with a pinpoint floating pass.

Italy were displaying commendable courage as they came under sustained pressure, but eventually they cracked again when George Kruis charged down a kick, grabbed the ball and fell over the whitewash.

Cokanasiga was given his legs on the right wing and he drew his man to give Robson a simple try, before Shields completed the rout with a simple score from close range.