Maro Itoje is a doubt to face Italy with knee injury 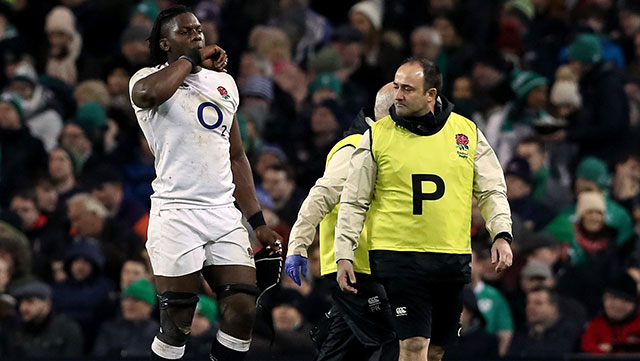 Maro Itoje's involvement in England's Six Nations clash with Italy has been placed into grave doubt after he hobbled out of training on Tuesday with a knee injury.

Bath's Charlie Ewels has been called up as second row injury cover in a 27-man training squad selected to step-up preparations for Saturday's visit of the Azzurri to Twickenham.

In an additional development, Jack Nowell could also miss the penultimate round of the Championship due to a stinger sustained against Wales, resulting in uncapped wing Ollie Thorley being retained among the 27.

Itoje was on course to make his comeback from the ligament damage sustained against Ireland on February 2 but the setback to the same knee has now cast a shadow over that prospect.

The imposing Lions lock was performing a forwards drill in front of Eddie Jones, but upon being hurt he fell to the floor in obvious pain and limped off.

Attack coach Scott Wisemantel insisted before Tuesday night's squad update had been issued that the injury is not significant and refused to rule the 24-year-old Saracen out against Italy.

"Maro has had a minor tweak and the medical staff are taking a look at it. He's being managed day by day anyway. I don't think it's anything serious," Wisemantel said.

"We've just got to wait and see what the medics say. We'll see how he pulls up tomorrow (Wednesday)."

Itoje was replaced in the first half of England's rout of Ireland in their Six Nations opener and the prognosis for his return from a grade two medial ligament tear was two to four weeks, potentially enabling him to feature against Italy and Scotland.

Courtney Lawes was lost to a calf strain sustained against Wales and England were banking on Itoje being available for Italy, hence the inclusion of only three locks in their initial 31-man training squad that was culled to 27 with Ewels being added.

Conor O'Shea's Azzurri have lost their last 20 Six Nations matches in a dismal sequence dating back to 2015.

Wisemantel, whose appointment to Jones' management team has coincided with England's flourishing attacking game, views the fixture as the platform for minor experimentation.

"It's an opportunity to change a few things, so we'll look to mix it up a little bit," the Australian said.

"But look at the teams who have played Italy - they haven't changed a lot. Scotland, Wales and Ireland have stuck to their structures and we won't go to far away from ours.

"It will be interesting to see what Italy bring, so we've prepared for all sorts of scenarios.