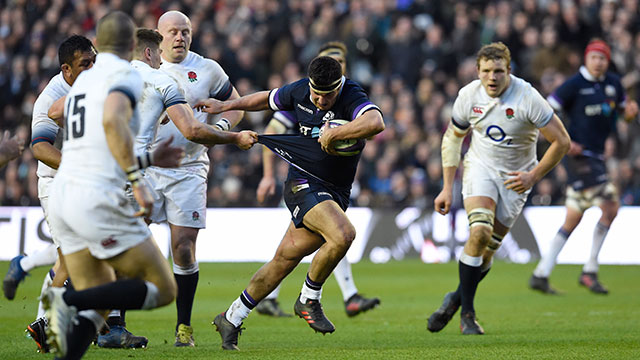 England remain in title contention as they wrap up their 2019 Six Nations campaign against Scotland at Twickenham on Saturday. Here, we examine five talking points heading into the match.

In his biggest selection shock of the Six Nations, Eddie Jones has dropped Joe Cokanasiga for the Calcutta Cup showdown. Just the previous weekend the bulldozing Fijian-born wing was being compared to Jonah Lomu for the way he swatted away Italian defenders.

Jones has stressed the need to be careful with the 21-year-old's development with the looming World Cup in mind, although even in these terms overlooking him against injury-hit Scotland seems like an opportunity missed.

The race is on

Jones all but confirmed that Cokanasiga will travel to Japan 2019 despite defying expectation and jettisoning him for the Calcutta Cup clash. With Jonny May, Jack Nowell and Elliot Daly certainties for inclusion in the 31-man squad, it leaves one back-three slot remaining.

Anthony Watson has been out for a year with an Achilles injury but covers full-back and wing, leaving lethal finisher Chris Ashton with an uphill task to convince Jones he should go instead.

England are well placed to snatch Ireland's crown but they need a favour from the current champions.

Wales must overcome Joe Schmidt's men to sign off Warren Gatland's final Six Nations with a Grand Slam, but if they fall short then victory over Scotland would ignite the celebrations at Twickenham.

Scotland's terrible record at Twickenham has seen them lose 16 of their last 17 visits, with a draw in 1989. Their last triumph in London was 1983 when Margaret Thatcher was Prime Minister, the average cost of a house was £34,426, the first episode of Blackadder was aired and Michael Jackson's Billie Jean was number one.

It is a sorry run the Scots are desperate to address, but given their long list of injuries it is unlikely to come to an end on Saturday.

Manu better now the worry is over

It was the boost England needed as Manu Tuilagi - possibly the nation's biggest star - rejected a lucrative offer from Racing 92 to sign a new two-year contract with Leicester, making him available for international selection until 2021.

The powerful 27-year-old centre admitted that the uncertainty over his future had weighed heavily on his mind, pointing to a more settled Tuilagi taking the field against Scotland.