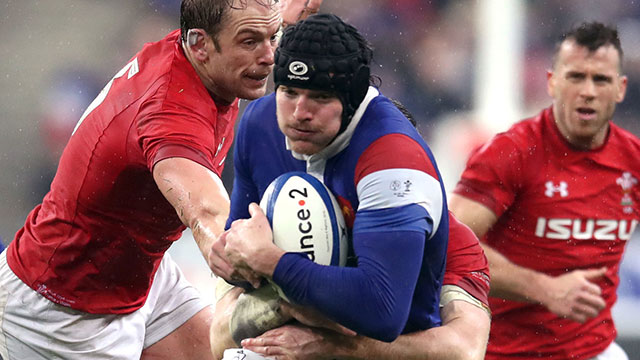 That dramatic win kick-started Ireland's Grand Slam charge and Sexton's march to the 2018 world player of the year award - but now Iturria hopes a resurgent France can turn the tide in Dublin this weekend.

"I remember when I got back to the changing room, I wondered what I had done on the pitch because I felt totally powerless," said Iturria.

"That day we ran into a wall of green. It was an immense experience for me because I had never played at that level.

"Last year, Ireland were on top of the world. Admittedly, this year, the Irish have lost against the English, but they are still a formidable team, second in the world rankings and have twice beaten the All Blacks.

"It will still be a great experience, especially since I have never played in Ireland.

"The Irish do very simple things, but they do them very well. That's what is impressive. They all play in the same direction."

Jacques Brunel's France conjured a 27-10 victory over Scotland in their last outing to ease the horrors of their 24-19 collapse to Wales and the 44-8 thrashing by England.

Les Bleus led Wales 16-0 at half-time on the opening weekend, only to fall apart in spectacular fashion.

England dished out a serious lesson to Brunel's men, prompting the head coach to usher in Toulouse duo Antoine Dupont and Romain Ntamack and tell the young half-backs to play what they see.

The tactic worked in style against the Scots, but the 24-year-old Iturria knows France could have to step to another level at the Aviva Stadium.

"For young players, for their growth, there is no point in talking about tests, they need to play at the level. Playing against the best players, against the biggest teams, it's formative," said Iturria.

"Unfortunately we do not have good experiences behind us so we can only be comforted by one match. Scotland was a good game, but it's now behind us.

"Now, we have to keep winning. And if we don't win, continue to build and make sure we move forward.

"It would be nice not to let people down as happened in England. At Twickenham, unfortunately, we did not build anything because of the hammering.

"The idea is to try to repeat our game against Scotland, without the small mistakes, especially as Ireland is a team that knows how to hold the ball when it has it."