Andy Farrell says Ireland are ready for the challenge of Wales 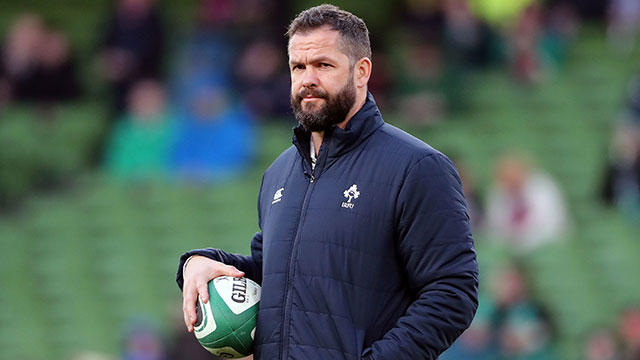 Andy Farrell has dismissed suggestions Ireland's players took an ego battering during their unconvincing win over Scotland and feels they are "brimming" with belief ahead of a titanic clash with Wales.

Ireland were red-hot favourites for their opening fixture of the Six Nations but scraped past the Scots with a nervy 19-12 win.

Farrell's men are likely to face a far tougher test this weekend when the reigning Grand Slam champions visit Dublin for a mouthwatering match which could have a major bearing on the destination of the title.

The head coach, who has made two enforced changes to his starting XV due to injuries to Caelan Doris and Garry Ringrose, insists his squad are working on their weaknesses and enthusiastic about the challenge ahead.

"I don't think their egos are bruised. They can't wait to get back on the field," said Farrell.

"Training today was quick, it was intense, it was ferocious. We had a few things to fix as well and we'll make sure we do that.

"We're in a good place, we're brimming, ready for what we know is going to be a really, really tough game.

"We know that Wales are Grand Slam champions and semi-finalists at the World Cup and rightly so.

"They're being talked up as a great team. We know what's coming this week, we get excited by that as well."

While Ireland started the Championship in stuttering style, Wales recorded a morale-boosting bonus-point win over Italy to kick-start a new era under head coach Wayne Pivac.

Farrell was extremely impressed by the Welsh team's opening performance of the competition as they adjust to life after Warren Gatland.

"Yeah, I thought they looked great," he said.

"I think everyone's getting carried away with the wide, expansive game that they play and it's great to watch and they're doing it really well.

"But the same old traditions of Welsh rugby that we've seen over the last 10 years under Warren, it's still there and rightly so.

"Their kicking game is excellent, their kick chase is good, their line speed is good, the width across the field defensively is pretty good, they're pretty clinical in the opposition 22 and they're a threat carrying the ball as well."

Ireland's preparations for a second successive match at the Aviva Stadium have been disrupted by the losses of Doris and Ringrose.

Doris' head injury, suffered inside five minutes of his international debut versus the Scots, means a recall for Peter O'Mahony at blindside flanker, with CJ Stander switching to number eight.

Ringrose was taken off at half-time against Gregor Townsend's side due to a hand problem and has also been ruled out of the trip to face England at Twickenham later this month, resulting in an opportunity for Robbie Henshaw at outside centre.

Farrell felt duty-bound to protect Doris in the wake of his agonising maiden international appearance and a previous whack.

"Caelan's had a bit of a knock previously this year, he's a young boy and I think we do the right thing by young kids and make sure that they recover properly," said Farrell. "He's in good spirits."

Ireland's enforced reshuffle could result in a debut for Max Deegan from the bench, while experienced wing Keith Earls is back among the replacements.

Farrell feels 23-year-old Deegan is well-equipped for the demands of international rugby and capable of adding an extra dimension to his team.

"He's got all the attributes of a great back-rower. You go into the unknown a little bit with Test match rugby but we feel he is ready," Farrell said of the Leinster player.

"He's a great all-round footballer and we feel he's going to add a dimension to us, especially in attack when he comes off the bench."

Prop Dave Kilcoyne retains his place on the bench, despite suffering a head injury after coming on against Scotland, but will be continually assessed during the remainder of the week.