Best feeling ever for Ireland captain after Grand Slam glory 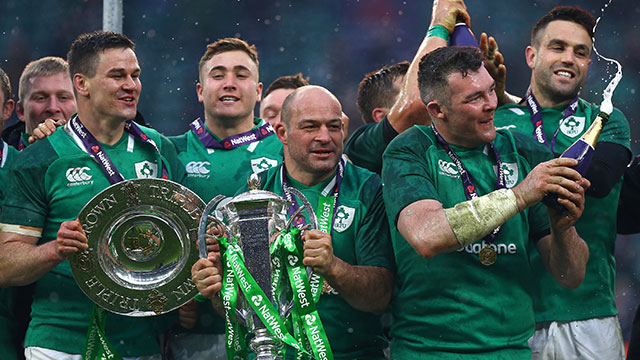 Ulster's evergreen hooker dragged Ireland to a Six Nations clean sweep to emulate the triumphs of 1948 and 2009, as Joe Schmidt's men overwhelmed England 24-15 at Twickenham.

Best and Rob Kearney now stand alone as Ireland's only double Grand Slam winners in history, and the 35-year-old admitted he could never have imagined skippering such a triumph.

Asked to compare his two Grand Slam successes, Best replied: "This feels more special, not only because I have started every game but also because of captaining the side.

"Every kid grows up dreaming of playing for Ireland, but to win something while captaining in that special green jersey is the stuff that dreams are made of. It's the biggest highlight of my career.

"It was a really, really tough match. We created a couple of opportunities and a few things we planned went our way.

"It was one of those days where we took a few set plays we wanted. But it was far from easy. They are a quality side.

"Defensively that was definitely our best display in the competition. We owed (defence coach) Andy Farrell one. We hadn't followed through on his plan before this."

A relieved head coach Schmidt hailed Ireland's gritty defensive effort at the top of the second-half as crucial to his side's clean sweep.

Asked what had made him most proud over the course of the tournament, Schmidt replied: "That eight minutes after half-time today totally summed up this team.

"We've scored a lot of tries this year, but that pure resilience, the ability to get back up in the defensive line, that was exceptional."

Johnny Sexton's last-gasp drop-goal in the third minute of overtime stole a 15-13 first-round win over France in Paris, stopping Ireland's campaign derailing before it had even started.

Former Leinster boss Schmidt paid tribute to the British and Irish Lions fly-half's sheer obduracy, and his side's ability to build the stunning 41 phases that led to that 45-metre strike.

"To show the steel that they did, the commitment and just plain, ordinary rugby ability to keep the ball," said Schmidt.

"And then the exceptional ability Johnny has to put the ball between the uprights.

"And as frustrating as it was for Wales to get close to us, I never really felt like we'd give it up, and then Jacob raced away.

"He was totally in control of that edge defence."

Ireland always review their captaincy at the end of each Test window, so Schmidt and Best will sit down together and plot the way forward in the coming days and weeks.

Best is yet to complete formalities on a new Ulster deal, but has insisted new terms have been close to being rubber-stamped for almost two months.

Schmidt echoed those sentiments, admitting he hopes the hooker will tie up his new deal with little further delay.

"Look he's getting faster and faster on that zimmer frame," joked Schmidt of his evergreen 111-cap, 35-year-old skipper.

"I think that's something that could come to fruition hopefully sooner rather than later.

"It's like everything. It's hard to get him to make a decision, so we'll see how we go with that."