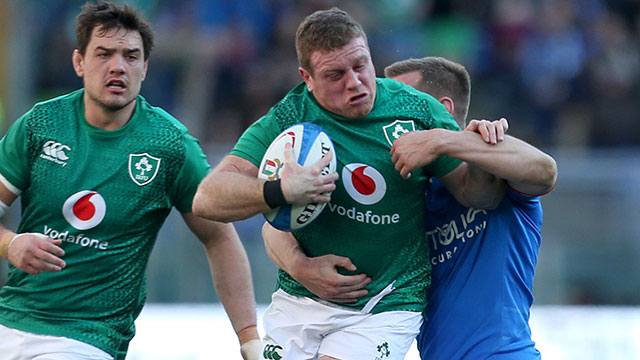 Ireland insist hooker Sean Cronin has lost no World Cup ground despite being dropped from the squad for Sunday's Six Nations clash with France in Dublin.

Cronin made his full Six Nations debut aged 32 and on his 68th cap when Ireland laboured past Italy 26-16 in Rome on Sunday, February 24.

And boss Joe Schmidt's response has been to cull the vastly-experienced Leinster star from his 37-man squad to prepare to host Les Bleus.

"I guess we're looking continually to build some depth in positions," said Easterby.

"Sean has been involved in the first three games, he has started in Italy, and in a specialist position like hooker; it's probably only nine and maybe 10 as well where you don't get guys playing other positions.

"We're just looking to continually build some depth and find out a bit more about players that we need to work with towards what's coming up in the next couple of weeks and the end of the year."

Cronin struggled in Ireland's patchy Rome victory, and asked if his omission was harsh, Easterby continued: "Well, no, my reasoning is what I said - it's to do with building some depth and we know a lot about Sean.

"We need to keep building that depth and knowledge of those players in that position."

And when quizzed on whether Cronin's absence from the France fixture could dent his World Cup hopes, Easterby added: "Certainly not, no."

Skipper Best should win his 116th cap this weekend, and will be 37 by the time the World Cup kicks off in Japan.

The evergreen Ulster hooker continues to deliver but Easterby explained Ireland are conscious of handing chances to other hookers to build their contingency options ahead of the autumn's global contest.

"He's going really well. But we have to be really careful in that position where we are potentially travelling to a World Cup.

"You need to know a little bit more about other players and if you lose a player of Bestie's quality you have to know more about the players we need to bring in."

Kieran Marmion has been drafted in at scrum-half, while Robbie Henshaw has failed to shake off a dead leg and Dan Leavy is not ready after ankle trouble.

Joey Carbery has been retained in Ireland's training squad, but Easterby admitted the Munster playmaker is likely to miss the France clash.

"Not being a medic I'd say he's probably unlikely to feature this week," said Easterby.

"He's probably recovered quicker than we expected but if it's 50-50 you wouldn't play a player.

"With Robbie Henshaw, he did it in training and they can be nasty if they don't quite get right."