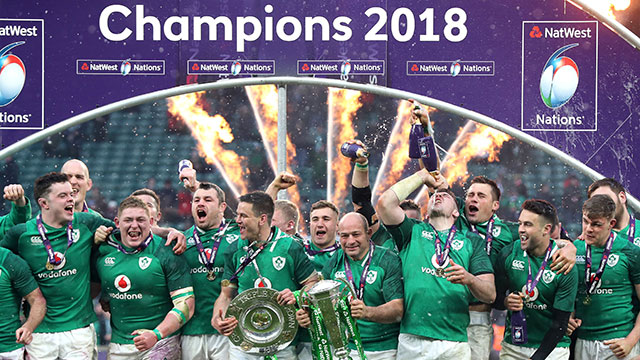 Ireland ignited the St Patrick's Day celebrations by completing the third Grand Slam in their history as England collapsed to a 24-15 defeat that nudges them towards Six Nations despair.

A record-extending 12th successive Irish victory was sealed at a canter as a 21-5 half-time lead at Twickenham established an unassailable position to elevate Joe Schmidt's class of 2018 alongside the heroes of 1948 and 2009.

Garry Ringrose and CJ Stander crossed before Jacob Stockdale plundered a record-breaking seventh touchdown of the tournament, claiming a try that was laced in irony due to the extension of the in-goal area in anticipation of snow.

England have descended into crisis as their 14-Test unbeaten home record under Eddie Jones drew to a close, in the process registering a third successive loss and a first championship defeat at Twickenham since 2012.

They must wait for the conclusion of Wales' clash with France in Cardiff to discover their final position in the table knowing that fifth would represent their lowest finish in Six Nations history.

Tired, rudderless and lacking in imagination, their title defence ended with a whimper one week after the crown had been surrendered in Paris and given the seven changes in personnel made for the final round, the path ahead is shrouded in uncertainty.

Elliot Daly ran in two tries and Jonny May went over in injury time, but England had started chasing a lost cause long ago.

Ireland, who counted Rob Kearney and Rory Best as the only survivors from the 2009 Grand Slam triumph, were efficient and precise but also produced the few moments of magic in an ugly spectacle.

They made their mark as early as the sixth minute when a high, hanging Jonathan Sexton kick was spilt by Anthony Watson while stationed on his own whitewash to enable Ringrose to touch down via confirmation from the TMO.

An attacking line-out was well defended by Ireland and there was more misery for England when Maro Itoje strayed offside.

James Haskell's head comically blocked the path of a clearance by Owen Farrell but there was nothing funny about the spell of pressure on the home line that eventually told in the 24th minute.

A line-out was worked to Tadhg Furlong via Conor Murray and Sexton and when Bundee Aki came racing through there was support on either shoulder, but it was Stander who was picked out to score by grounding the ball at the base of the post.

England sent four close-range penalties into the corner in their pursuit of a try that eventually came when Farrell, whose initial burst began the attack, chipped into the left corner for Daly to touch down.

Peter O'Mahony had been sent to the sin-bin, Watson departed on the medical cart and Sexton disappeared for an HIA as any hope of English momentum disappeared amid a succession of penalties.

And Ireland made them pay in first half injury-time, exploiting a tight blindside before Stockdale burst free, chipped ahead and beat the cover to finish a brilliant solo try.

Daly's high tackle on Rob Kearney ended another England attack and when Murray landed a penalty, the champions were truly out of sight.

Finally there was a spark of imagination in the home ranks as quick hands sent Daly over and May was able to grab an injury-time try, but it was all too late.