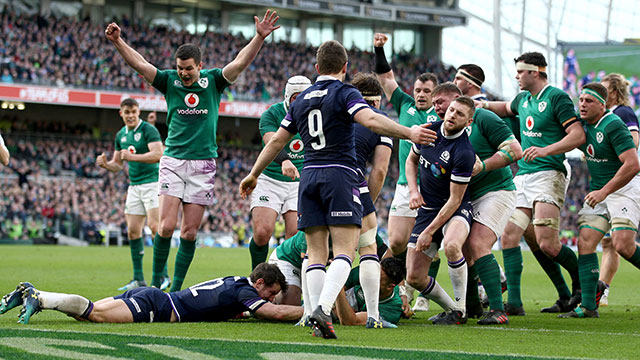 Record-breaking Ireland set up an all-out assault on the Six Nations Grand Slam by claiming a 28-8 bonus-point win over Scotland in Dublin.

Jacob Stockdale bagged a brace to become the first Irishman to score six tries in a single campaign in Five and Six Nations history, as Ireland moved within one win of just a third-ever clean sweep.

Conor Murray and Sean Cronin also crossed to secure the bonus-point victory that could even see Joe Schmidt's men claim the Six Nations title with a week to spare.

Unless England could claim a bonus-point win over France in Paris, Ireland would be crowned champions on Saturday night.

Schmdit's class of 2018 also set a new Ireland record with an 11th consecutive victory, their winning run dating back to last term's 13-9 win over England in Dublin.

Even if Ireland were to seal a third title in five years with a week to play, Schmidt's side only have eyes for one prize now - a first Grand Slam in nine years.

Ireland face England at Twickenham on Saturday, March 17, where a St Patrick's Day victory would add this group of players to the Grand Slam-winners of 1948 and 2009.

Fit-again Garry Ringrose excelled despite only featuring for an hour for Leinster since January, with Peter O'Mahony also to the fore.

Ireland's sole problem could perhaps prove to be a fitness doubt for Cian Healy, who appeared to take a heavy blow to the head late in the first-half and was replaced just after 50 minutes.

Scotland's rapier invention and offloading terrified an Ireland defence at sixes and sevens from the off. The visitors bossed the breakdown turnover battle as predicted too.

Their finishing let them down horribly in a fizzing first-half however, with a woeful final pass from Huw Jones denying Stuart Hogg a cakewalk home.

Ireland punted an eminently kickable penalty to the corner, only to come away with no reward for that early enterprise.

Scotland took the lead thanks to Greig Laidlaw's penalty, but then that off-kilter finishing bit hard.

Two wayward Peter Horne passes cost Scotland dear, the first forcing Blair Kinghorn to dive to retrieve, when if accurate could have let the full debutant fly into the corner.

Then the Glasgow centre paid the ultimate price for forcing another wide ball, when Stockdale intercepted his loose effort to race in for the game's first try.

Scotland came again, stretching Ireland often, only for Jones to bungle what ought to have been a facile score for Hogg.

The excellent Ringrose's tap-pass sent Rob Kearney hurtling into the Scotland 22, Murray edged closer and Bundee Aki was held up over the line.

A five-metre scrum, the last play of the half and Ireland itching for any kind of control and Ringrose not only set the platform, but also looped around Aki on the next phase, before sending Stockdale in for his and Ireland's second score.

Johnny Sexton's conversion handed Ireland the 14-3 half-time lead, and the hosts wasted little time extending that margin after the break.

Horne's miserable afternoon continued, this time going off his feet trying to force a turnover in his own 22.

Ireland punted to the corner, drove the lineout and Murray sniped over the line. Sexton's conversion pushed Ireland into a 21-3 advantage.

Scotland finally found their finishing feet however, Kinghorn dotting down acrobatically in the corner.

Ireland rallied and regained control, only for Sexton to drag a testing penalty just wide.

But when replacement hooker Cronin barged home from a driven lineout, Ireland had that all-important bonus-point, and the title tantalisingly within their grasp.

The Fields of Athenry warmly rang around a sun-drenched Aviva Stadium as the clocked ticked out, with Ireland players and fans alike already diverting eyes and minds elsewhere.

ROB KEARNEY: A vintage performance from one of just two 2009 Grand Slam winners in the XV, rock-solid and a constant attacking threat too: 8/10

KEITH EARLS: Tidy as ever but had scant chance to cut loose. Create some openings for him, and Earls will rack up the tries: 7

GARRY RINGROSE: A stellar return from the fleet-footed Leinster centre, a key performer in both attack and defence: 8

BUNDEE AKI: A real midfield totem for an Ireland side struggling at times to keep its defensive shape: 7

JOHNNY SEXTON: Kept the team ticking over as ever but did not enjoy the kind of comfy platform of weeks past: 7

CONOR MURRAY: Only Aaron Smith in world rugby stands up as a genuine rival to Murray's claim as the best nine on the planet: 8

CIAN HEALY: Could have picked up an injury but gritted his teeth well again: 7

TADHG FURLONG: A fine shift on his return from hamstring trouble shored up Ireland's scrum: 7

JAMES RYAN: Plugged away all day without being able to rampage, but another smart showing nonetheless: 8

DEVIN TONER: Put himself about and showed his growing dynamism once more: 7

PETER O'MAHONY: The most crucial element of Ireland's win. Forget the fact he was replaced before the hour. His breakdown mastery snuffed out Scotland's top threat: 9

CJ STANDER: Not cutting loose on the ball these days, but still grafting away without let-up: 8

Replacements: Ireland emptied their bench between 50 and 60 minutes, and the move proved useful in securing victory, Sean Cronin bagging the potentially-vital bonus-point score.

STUART HOGG: Used his gun boot to dig Scotland out of a few tricky situations but was guilty of a sloppy pass which could have put Kinghorn in: 6

BLAIR KINGHORN: The Edinburgh man produced a great finish to mark his first international start with a try but should have got to grips with Stockdale as he scored his second on the stroke of half-time: 6

HUW JONES: Wasted a golden chance just after Ireland had taken lead to put Hogg clean through under the posts with a horribly mistimed pass: 5

PETE HORNE: A day to forget for the centre. Left Gifted Stockdale the opener with a needless intercepted pass and then failed to slot in Kinghorn as Ireland opened up: 4

SEAN MAITLAND: Produced a brave tackle on Murray just before half-time to prevent what seemed a certain score. Showed the calmness lacked by some of his team-mates to tee up Kinghorn's touchdown: 6

FINN RUSSELL: Unable to pull the strings in the same flamboyant manner as he did in last month's Calcutta Cup triumph: 5

GREIG LAIDLAW: Looked to shift the Irish about with his box kicking but too often failed to give his team-mates a chance to compete: 5

GORDON REID: Held his corner of the scrum up well but his work on the loose did not give the Irish too much to worry about: 6

SIMON BERGHAN: Just about got the upper hand on Healy at scrum time but blotted his copy book with some breakdown penalties: 5

GRANT GILCHRIST: A decent display from the Edinburgh lock as he got through a decent shift in defence but outplayed by Ireland's second-row menaces: 6

JONNY GRAY: A typical hard-working performance from the Glasgow man as he did the dirty work he enjoys so much: 6

JOHN BARCLAY: Found the breakdown battle far harder going than he did against the Auld Enemy as he failed to get referee Wayne Barnes on side: 6

HAMISH WATSON: Also struggled to make his mark on the ground as Ireland piled in mob-handed to snuff out his smuggling efforts: 6

RYAN WILSON: Barely got started before he was forced off after just 17 minutes with a head knock: 5

Replacements: David Denton tried to inject some power when he replaced Wilson early but the introduction of a fresh front row in the shape of WP Nel, Fraser Brown and Jamie Bhatti did not produce the spark Scotland were hoping for.