Ireland fail to convince as they edge past Italy 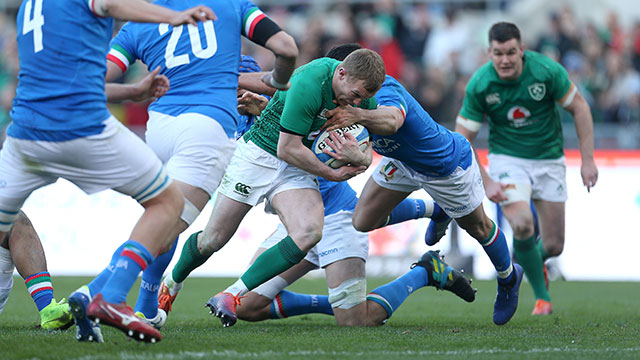 Stuttering Ireland tiptoed out of Rome with an unconvincing 26-16 Six Nations victory, claiming the four-try bonus point but suffering a serious scare from Conor O'Shea's men.

Quinn Roux, Jacob Stockdale, Keith Earls and Conor Murray crossed for an Ireland side again struggling for fluency and rhythm.

Edoardo Padovani and Luca Morisi bagged tries for Italy to lead 16-12 at half-time, but Ireland edged home to leave the Azzurri still without a Six Nations win under O'Shea's stewardship.

Ireland's niggles were underlined by Johnny Sexton muttering angrily to himself and kicking out in frustration when he was replaced late on for Jack Carty to make his Test debut.

Bundee Aki suffered a head injury and Sexton played through a minor leg problem that led to Murray taking over goal-kicking duties.

Head coach Joe Schmidt wanted Ireland - and chiefly half-backs Murray and Sexton - to rediscover the rhythm which underscored their stellar 2018.

That fluency continues to elude Ireland and their British and Irish Lions playmakers, but Schmidt's men must at least be credited for emerging unscathed from a tricky situation.

Captain on the day Peter O'Mahony admitted beforehand that Ireland's 22-15 defeat to Italy in Rome in 2013 still sends shivers down his spine.

The Munster flanker led his men to avoid any further such trauma at the Stadio Olimpico then,but this was another Ireland performance littered with indiscipline and inaccuracy.

Roux and Stockdale handed the visitors the perfect start with two tries in the first quarter, but Ireland had already wasted several scoring platforms by that point.

Both Italy tries came from Ireland errors, first Ireland overthrew a line-out in their own 22 and Italy pounced, Tommaso Allan firing a ball over the top for Padovani to nip home.

Then Tito Tebaldi pinched the ball at the base of an Ireland ruck to spark a field-length counter-attack which ended in centre Morisi powering over the whitewash.

Ireland's half-time problems could even have been worse, had full-back Rob Kearney been punished for what appeared a deliberate block on Tebaldi.

The marauding Italy scrum-half chased his chip deep in Ireland territory when Kearney stepped into his path and sent him tumbling.

Referee Glen Jackson ignored the incident entirely though, in a clear let-off for Schmidt's men.

Ireland improved after the break, though in truth not nearly enough to touch anything like the heights of the 2018 that included the Grand Slam and the November win over New Zealand.

Earls stepped his way over the line to wrestle back Ireland's lead, before Murray's sniping finish secured the try bonus.

Munster flyer Earls so nearly claimed the score of the match, only to be dragged down mere metres short. Italy fell for the latest Schmidt special move, with this one seeing Sexton run a wraparound decoy line allowing Earls to blast through midfield.

Hauled down just shy of the line though, his pass fell astray and the move broke down.

Job done for Ireland in the end, but precious little else, leaving Schmidt's men needing to step up several levels to face France and Grand Slam-chasing Wales.