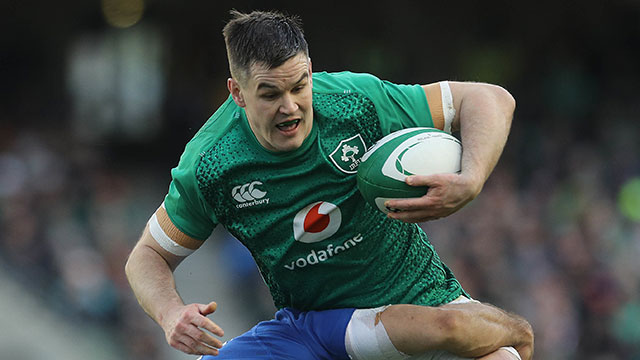 Wales are already on an all-time record 13-win run, and one more at the Principality Stadium this weekend would seal a first Six Nations clean sweep in six years.

Ireland ended New Zealand's 18-match winning streak with the 40-29 victory in Chicago in November 2016, then stopped England at the same tally, denying Eddie Jones' men a 2017 Grand Slam with a 13-9 triumph in Dublin.

"I don't know if Wales feel like they're invincible, they're saying that they've forgotten how to lose and all of that," said Sexton.

"They've eked out some results, we've played well against teams that have gone on runs before; New Zealand, England; stopping their runs.

"Again, we'll give them the respect that they absolutely deserve. We'll analyse them, we'll talk about where we can get at them, where we think they are very strong and we'll come up with a plan.

"I don't think we'll talk too much about the psychology of them.

"I'm sure there is a lot of pressure on everyone for every international.

"I know from talking to some of the Welsh lads on previous tours that the expectation in Wales is huge all the time and it will be at its highest this week to get a Grand Slam.

"They don't come around too often.

"They will be under pressure, but so will we. We want to finish on a high and win a championship.

"We still have a shout and we know that if we get a performance then the pressure is on England and they you never know what might happen."

Captain Rory Best will play his final Six Nations match in Saturday's Cardiff encounter, with the evergreen hooker intending to retire after the autumn's World Cup.

Vice captain Sexton hailed Best's stewardship, insisting Ireland want to make the most of the rest of the Ulster star's time at the helm.

Asked to outline Best's leadership qualities, Sexton replied: "Do you have half an hour? Look I think he's been a brilliant captain for us over the years.

"Always team first, Always very selfless and leads on the pitch with his actions.

"He leads off the pitch too and he's a great character to have around.

"Sometimes if the lineouts are not always going well, if the right decision is to go for the corner he'll still say go to the corner, and he'll take responsibility.

"That's the sign of a brilliant captain; he does what's right for the team all the time. We'll miss him when he's gone but we've got a lot of time left with him so we'll make the most of it."