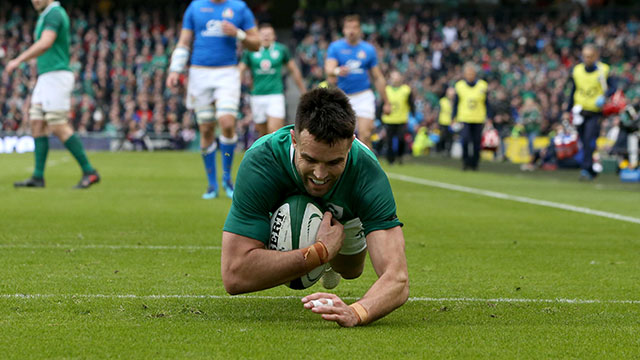 Ireland crushed Italy to make it two wins from two in this season's Six Nations. Facing Irishman Conor O'Shea's side in Dublin, the hosts ran in eight tries as they won 56-19.

Robbie Henshaw scored two tries but trudged off the Aviva Stadium field with his right arm in a sling.

Tadhg Furlong limped out after just three minutes with a left hamstring injury, joining Henshaw as a doubt to take any further part in the tournament.

Tommaso Allan, Edoardo Gori and Matteo Minozzi hit back late for Italy, but the visitors had already been easily overwhelmed by Ireland's starting XV.

Joe Schmidt's hosts upped the attacking ante after last weekend's 15-13 win over France in Paris, albeit under precious little pressure, to step closer again towards a possible title-decider with England at Twickenham on March 17.

Henshaw produced a punishing showing before being forced out, landing heavily and suffering the injury on scoring his second try.

Young Leinster prop Andrew Porter stood up well in a 77-minute Six Nations debut, stepping in far ahead of time given Furlong's injury.

Henshaw barrelled home to start the glut, Toner pinching an Italy lineout at the tail, Sexton punting a penalty to the corner - and Stockdale scything close before the Leinster 13 bruised over.

Wily scrum-half Murray conjured Ireland's second score, his wraparound generating the overlap, before he ghosted round Jack Conan, positively begging the number eight to step off the touchline and float the scoring pass back in his direction.

Aki muscled home from short-range for Ireland's third score, before busting the line to send Earls home for the bonus-point score on just 35 minutes.

Italy punted a kickable penalty to touch, only to bungle the lineout, and that was half-time, with Ireland coasting at 28-0 ahead.

Parisse's overreaching blind flip pass landed straight into Henshaw's lap to open the second half, and the Ireland centre ploughed home for his second score.

The Leinster star suffered a nasty-looking injury in the act of grounding the ball under tackle pressure however, and there his day ended - leaving the field with a sling on his right arm, and receiving oxygen.

That drew debutant Larmour into the fray, with Earls slotting into the 13 berth and the new man assuming the right wing role.

Skipper Best toasted his 108th cap with his ninth Test try, bowling in after a lineout maul, and Carbery posted the conversion.

Allan raced in to put the Italians on the scoreboard ahead of the hour, the fly-half then converting his own score.

Minozzi finished well for Italy's third, before Earls hunted down Mattia Bellini to deny the visitors a bonus-point fourth score.