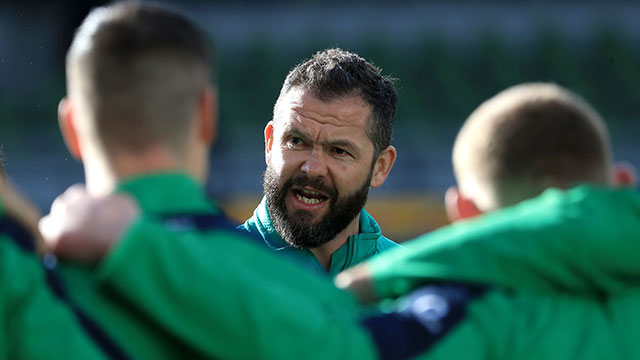 The Irish travel to Twickenham seeking to clinch a second Triple Crown in three years after beginning this year's tournament with successive home wins over Scotland and Wales.

Farrell has resisted temptation to recall fit-again number eight Caelan Doris for the visit to south-west London, sticking with the in-form CJ Stander in the centre of the back row, with Peter O'Mahony continuing at blindside flanker.

Doris, who was forced off with a head knock in the opening minutes of his international debut against the Scots on February 1, is named among the replacements in place of Max Deegan after missing the bonus-point win over Wayne Pivac's Wales.

Deegan's omission is the only change to Farrell's 23-man squad.

Robbie Henshaw has overcome a head injury suffered against the Welsh to renew his centre partnership with Bundee Aki, while captain Johnny Sexton continues at fly-half alongside scrum-half Conor Murray.

Experienced wing Keith Earls again has to be content with a place on the bench as Ireland's back three now has a settled look to it, with Andrew Conway and Jacob Stockdale playing either side of full-back Jordan Larmour.

Rob Herring once again gets the nod over Ronan Kelleher at hooker, with Cian Healy and Tadhg Furlong completing the front row, backed up by locks Iain Henderson and James Ryan.

Openside flanker Josh Van Der Flier, scorer of one of Ireland's four tries against Wales, joins Stander and O'Mahony in the back row.