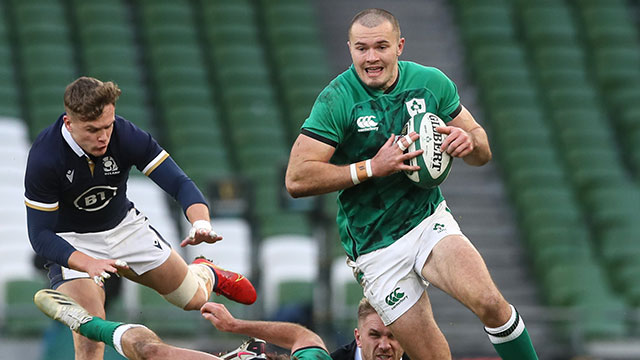 Ireland pair Jacob Stockdale and Bundee Aki will make their first appearances of the 2021 Six Nations as part of six personnel changes for Saturday’s finale against England.

Ulster wing Stockdale has been selected ahead of the misfiring James Lowe on the left flank having fully recovered from a knee problem, while Aki will replace injured centre Garry Ringrose.

Conan, who has not started a Test since September 2019, will play at number eight, meaning CJ Stander will play what is set to be his 51st and final game for Ireland at blindside flanker after the shock news of his impending retirement was announced on Tuesday, with Van Der Flier in for the injured Will Connors at openside.

The in-form Tadhg Beirne has been pushed forward from number six to take the second-row spot vacated by head injury victim James Ryan and will pack down alongside Iain Henderson.

Flanker Peter O’Mahony must wait on the bench for his opportunity having completed a three-game ban following his red card in the opening-weekend defeat to Wales.

Meanwhile, Murray – an unused substitute in Sunday’s 27-24 win over Scotland – has reclaimed the number nine jersey from Jamison Gibson-Park to feature for the first time since the Cardiff loss following a hamstring issue, while Kilcoyne has been preferred to the benched Cian Healy in the front row.

Ireland are seeking a first win over Eddie Jones’ men since their Grand Slam glory of three years ago in a bid to cement second spot at the end of an underwhelming campaign.

Farrell’s side bounced back from successive defeats to Championship-chasing sides Wales and France with wins over Italy and Scotland.

The Irish build-up to the game has been dominated by the unexpected news that South African-born Stander, who will turn 31 early next month, intends to hang up his boots in the summer following possible involvement in the British and Irish Lions tour of his native country.

New Zealand-born wideman Lowe has been dropped from the squad completely on the back of his defensive difficulties in Edinburgh, resulting in the recall of 2018 player of the tournament Stockdale.

Stockdale has not performed on the wing for his country since last February’s pre-pandemic defeat at Twickenham, finishing the 2020 Six Nations and playing the Autumn Nations Cup at full-back.

Kilcoyne joins Rob Herring and Tadhg Furlong at the front of the pack, ahead of locks Beirne and Henderson and back-row trio Stander, Conan and Van Der Flier.

Flanker Connors has impressed in recent weeks but was ruled out on Thursday by a knee injury suffered in training.

Aki started each of Ireland’s Six Nations games last year but has not featured in a matchday squad this year.