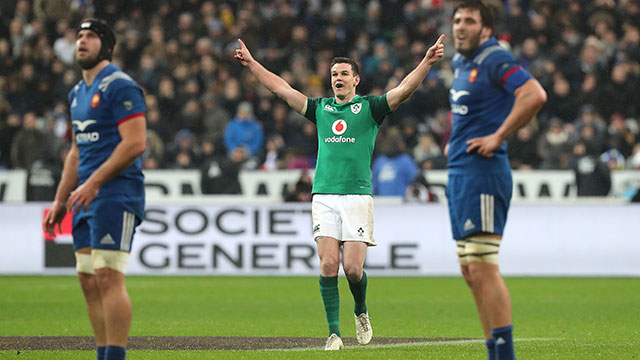 The fly-half landed a long-range kick in the third minute of added time, to pinch Joe Schmidt's side a victory that had appeared already lost.

But just when Ireland appeared beaten, Sexton unleashed a stunning drop-goal to wrestle victory - and keep hopes alive of a Grand Slam decider with England at Twickenham on March 17.

Ireland appeared in control for the majority of the match, failing only to add a try to their composed performance. But Joe Schmidt's men almost crumbled after the otherwise reliable Sexton missed a regulation penalty just past the hour.

The previously subdued France summoned fresh levels of zeal and grit - and Ireland came so close to finding no answer to Thomas' scything finish.

But after Belleau failed with a testing penalty effort, Ireland rallied once more, with Sexton taking the glory - and then being mobbed on the field by his team-mates.

Ireland carried a deserved 9-3 lead into the break courtesy of three Sexton penalties.

The visitors dominated the first 40 minutes, but ought to have turned around with at least one try.

Cian Healy was robbed on the ground after Ireland had ploughed through 13 phases in the France 22, and with that turnover went their best chance of crossing the whitewash in the half.

Compounding errors almost cost Schmit's side, when CJ Stander was stripped in contact, and then Rob Kearney was penalised for holding on in a botched counter-attack.

Maxime Machenaud posted France's solitary penalty for the half, leaving both sides craving a genuine breakthrough.

Sexton's fourth penalty edged Ireland further ahead to open the second half, before the visitors laid siege yet again on the French whitewash.

But just as in the first half, another long-winded set of phases - this time 15 - ended with France clearing their lines, not an Ireland try.

Machenaud's second penalty cut Ireland's lead to 12-6, and so the scores stayed until the hour.

Sexton served up a surprise miss with his fifth penalty attempt, emboldening France into a frenzied attack.

And as Les Bleus continued to build, Ireland failed to turn the tide. Just as with French sides of old, Brunel's outfit switched in a flash from rabble to rampant.

The prostrate Sexton's pained face after failing to rebuff Thomas told the full story. Replacement fly-half Belleau slotted the facile conversion, and France had the 13-12 lead.

Belleau missed a penalty shot with three minutes to play, handing Ireland renewed impetus and hope of clawing their way back to victory.

And Sexton delivered, nailing his drop-goal to atone for his earlier miss, before disappearing under a mountain of joyous green-clad team-mates.

KEITH EARLS: Always dangerous with the ball in hand but unable to cut loose - 6

ROBBIE HENSHAW: The workhorse of the Ireland backline put in another big shift - 7

BUNDEE AKI: A huge physical pivot around the playmaking qualities of Sexton and Murray - 7

JACOB STOCKDALE: Another man who kept plugging away all night long - 7

JOHNNY SEXTON: The star fly-half kept his nerve at the death to steal Ireland a victory that had already appeared lost - 9

CONOR MURRAY: Another stellar showing from one of the world's best scrum-halves - 8

CIAN HEALY: Bullish effort especially in the scrum from a hugely dependable performer - 8

RORY BEST (CAPT): Put himself about and stayed tidy in his set-piece work - 7

TADHG FURLONG: Unable to cut loose with bullocking runs, but fine in everything else - 7

JAMES RYAN: Some Six Nations debut from the Leinster youngster, who bossed almost every aspect - 9

PETER O'MAHONY: Worked tirelessly all night and will have breathed a sigh of relief to gain the reward - 7

JOSH VAN DER FLIER: The Leinster star's night was cut short by injury, but it was a solid start - 7

REPLACEMENTS: Flanker Dan Leavy looked lively stepping in before half-time for Van der Flier and everyone else did their bit - 7