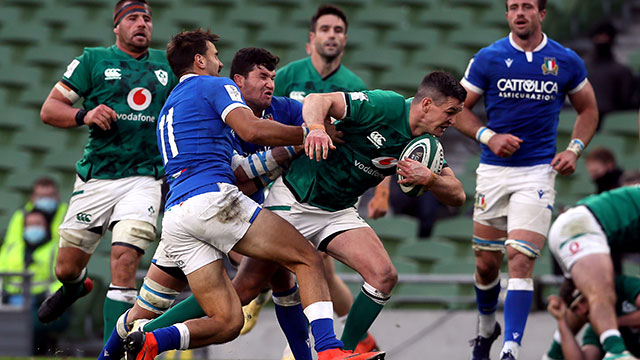 Ireland face Italy on Saturday seeking to recover from their worst start to a Six Nations campaign.

Andy Farrell’s men have suffered successive defeats to Wales and France, while the hosts are also searching for a first win of the tournament.

Here, we take a look at some of the main talking points ahead of the game in Rome.

Ireland’s third-place finish in the 2020 Six Nations was deemed to be an “average return” by Irish Rugby Football Union performance director David Nucifora. Consecutive defeats mean it is already a tall order to replicate that moderate achievement. The Irish are resounding favourites to win at Stadio Olimpico and only a convincing victory coupled with an accomplished display is likely to prevent further scrutiny of progress under Farrell. The head coach has repeatedly expressed satisfaction at what he has seen away from the cameras and insists pressure makes him “feel alive”. Given recent results and the level of opposition, a first away success of his short tenure is a must.

Debate about whether veteran captain Johnny Sexton will be available for the next World Cup will almost certainly rumble on for the foreseeable future. The 35-year-old said this week that he “might not” be around for the 2023 tournament but later clarified it was a “throwaway comment” and stressed he would assess his future year by year. With fly-half deputies Billy Burns and Ross Byrne each yet to convince they are capable of becoming his long-term successor and Joey Carbery working his way back from injury, there is little doubt Sexton remains his country’s leading number 10 for the time being. He will return from a head knock to win his 97th cap this weekend and should prove a steadying influence following a rocky few weeks.

In the aftermath of the narrow 15-13 loss to Les Bleus, Farrell spoke of needing more creative spark from his backs. Ireland have scored a tournament-low two tries to date and both have come from forwards – Tadhg Beirne and Ronan Kelleher. A failure to break down stubborn defences is becoming a regular concern. With Sexton back and Jordan Larmour handed his first start on the wing since before the 2019 World Cup, Farrell has named a backline comprised entirely of Leinster players. The Englishman will hope that familiarity can lead to greater cutting edge, while facing the competition’s weakest side should provide the perfect stage to cut loose.

Although Farrell has demanded greater ingenuity from his more technically-gifted players, his raft of changes have largely come among the pack, including a complete front-row revamp. Only lock Iain Henderson and number eight CJ Stander have retained their positions from the France game. Tighthead prop Tadhg Furlong starts for his country for the first time in more than a year, with Kelleher earning a chance at hooker following his try-scoring cameo against France, and Dave Kilcoyne making a rare start at loosehead. Vice-captain James Ryan returns from his head injury to beef up the second row, pushing Beirne back to blindside flanker, while Will Connors comes in at openside.

Italy’s Six Nations losing streak – stretching back six years – is in danger of being extended to 30 games this weekend. Azzurri head coach Franco Smith has named an unchanged side after being competitive in defeat to defending champions England last time out but their wretched run remains a blight on the Championship. While there have been calls for the introduction of promotion and relegation into the tournament via a play-off game, Farrell feels the Italians deserve to retain their place, pointing to the progress being made under South African Smith. There are plenty who disagree.