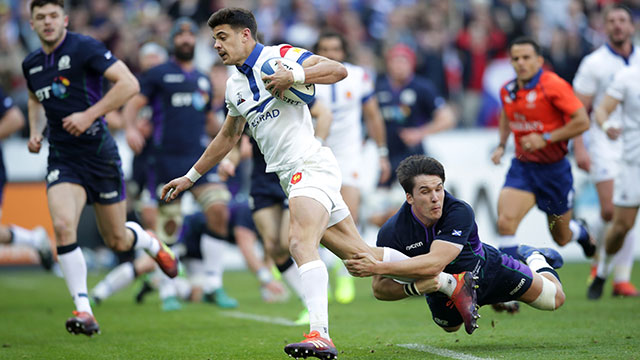 Scotland's Six Nations campaign has been reduced to an exercise in damage limitation after failing to end their two-decade wait for a win in Paris.

France secured a 27-10 bonus-point win with tries from Romain Ntamack, Yoahn Huget and a late Gregory Alldritt brace as the injury-hit Dark Blues contributed to their own downfall for the second game running.

Defeat to Ireland a fortnight ago was also self-inflicted and now Gregor Townsend's men are left with two games against Wales and England - the world's number four and three ranked sides - to salvage some pride from a Championship that has so far produced only a win over whipping boys Italy.

Townsend has had to contend with a horror casualty list this campaign but the loss of Scotland's three most dangerous weapons in Finn Russell, Stuart Hogg and Huw Jones was felt as they struggled for attacking inspiration.

Ali Price's late score was mere consolation, while France had four tries chalked off as Scotland escaped an even more chastening afternoon.

Scotland knew a good start was crucial if they were to pile fresh pressure onto Jacques Brunel's side after their humiliating defeats to Wales and England.

They got a lucky break seven minutes in as a Damian Penaud try was ruled out when the TMO alerted Argentinian referee Nic Berry to Antoine Dupont's knock-on.

That sparked a furious reaction from the Saint-Denis crowd but they were off their seats cheering just six minutes later as Ntamack marked his first start at fly-half with the opener.

Peter Horne failed to put a kick into touch and that set Thomas Ramos loose. Snaking his way through three tackles, the full-back released Penaud, who then span the ball back inside for Dupont. The scrum-half was pulled down by Nick Grigg before he could score but there was no-one there to stop Ntamack running over.

Ramos converted before putting over a penalty as France put the squeeze on.

It looked to be going horribly wrong for the Scots. Guilhem Guirado halted a promising attack with a thunderous hit on Horne while the ever-dependable Greig Laidlaw hit a straightforward kick off the post.

His next attempt did fly over and when Yoann Huget was sin-binned for illegally playing the ball on the deck, opportunity beckoned for the visitors.

But it was France who came closest to scoring again before the interval. Another Horne mistake as he spilled a high ball looked set to be punished but again the TMO came to Scotland's rescue as Wenceslas Lauret's knock-on meant Gael Fickou's score was chopped off.

Given how many mistakes Scotland had made during the opening 40 minutes, a seven-point deficit was kind.

But there was to be no repeat of the second-half collapse that saw France throw away a 16-point advantage against Wales in week one as Huget crossed over within a minute of the restart.

Mathieu Bastareaud ghosted past Josh Strauss with an audacious chip over his head. Horne then missed a tackle on Fickou before the ball was worked out to Huget to dance in for a try that made some amends for his blunder that sparked the Welsh comeback.

Adam Hastings took over at 10 from Horne and his introduction finally allowed Scotland to build some pressure but there was no give in Les Bleus' backline.

Once again the TMO conspired against France as another Fickou touchdown was disallowed but there was no stopping Alldritt as the home pack powered through Scotland's defence with three minutes left.

Horne broke free to tee up Price for a late score but it was too little too late for Scotland.

There was another TMO review in stoppage time as France chased a bonus point. Their first drive from a line-out was ruled out but Alldritt did get the fourth try as he muscled over from close range.