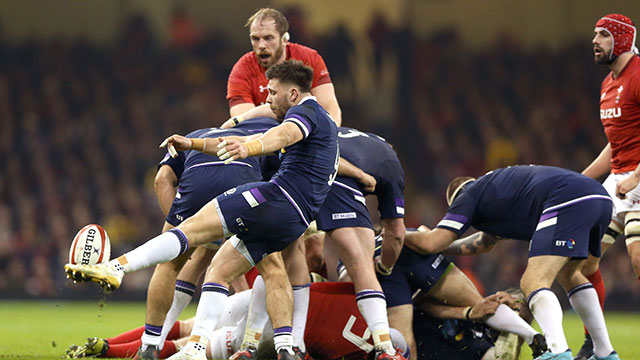 Wales face their next challenge on Saturday of what they hope can be a Six Nations title and Grand Slam-winning campaign. Here, we look at some of the talking points ahead of Wales facing Scotland.

They tackle Scotland at Murrayfield knowing that victory would leave them needing to beat Ireland in Cardiff next week to land European Test rugby's glittering double prize.

Wales have a dominant record against Scotland

In terms of the fixture's form guide, Wales will start as firm favourites this weekend. They have beaten Scotland in 11 of the countries' last 12 meetings, including four out of five at Murrayfield. Scotland can take heart from two years ago when they overturned an interval deficit and scored 20 unanswered second-half points to triumph 29-13, but they face a major task against a team unbeaten in 12 Tests, which is a Welsh record that stretches back to February 2018.

Wales are chasing a fourth Six Nations Grand Slam, having achieved clean sweeps in 2005, 2008 and 2012. And history shows they do not relinquish such an opportunity from a position of posting victories in the opening three matches. This season, they have already seen off France, Italy and England, so Scotland have it all to do. When Grand Slam-chasing Wales went to Edinburgh 14 years ago for their Six Nations match - the fourth of that season - they triumphed by a record 46-22 scoreline.

Greig Laidlaw on the fade?

There has been no doubt Scotland skipper Greig Laidlaw has not had his best championship so far, and with the World Cup looming, Scotland head coach Gregor Townsend has decided Saturday is the time to give Ali Price his chance to prove he can lead the Dark Blues towards Japan 2019. Laidlaw, 33, has faced this kind of threat before - most notably in last year's opening clash with Wales when Price got the nod in Cardiff - but Price was poor and let his scrum-half rival back in.

Can Wales' players forget about the politics?

Wales head coach Warren Gatland admitted earlier this week that rugby politics had been a distraction to his players. While Wales target Six Nations success, off the field it is a story of domestic turmoil as debate rages about so-called Project Reset and how Wales' professional regional game will look from next season. Talks now appear to be deadlocked, a proposed Scarlets-Ospreys merger is off the table and considerable uncertainty remains. A Wales victory on Saturday would, in some ways, represent a triumph over adversity.

Scotland badly missed the creative spark their maverick Racing 92 fly-half provides when they went down meekly to France in Paris a fortnight ago. But Russell has now shaken off the head knock which caused him to miss that Stade de France showdown, and he will aim to ignite a Scotland performance that blows away Wales' Grand Slam bid. Two years ago, he scored 19 points when Scotland beat Wales.