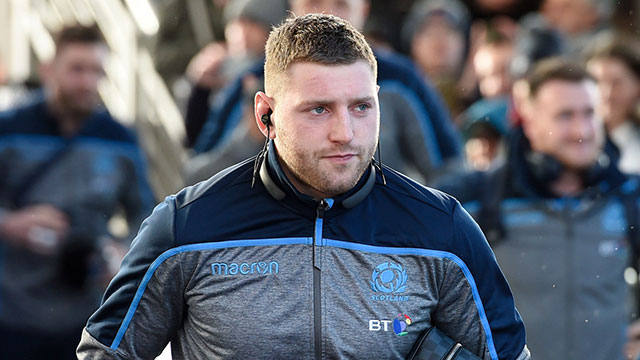 Scotland have been boosted by he return of a host of players as they look to arrest their losing run in the Six Nations against leaders Wales.

Stand-off Finn Russell joined up with his international team-mates on Monday morning after returning to action with Racing 92 at the weekend having missed the 27-10 defeat by France with concussion.

Forwards Hamish Watson, WP Nel, Sam Skinner and Grant Stewart are back in the squad along with Glasgow centre Stafford McDowall.

Matt Fagerson and Byron McGuigan - who missed out on the initial squad through injury - and London Irish prop Gordon Reid also come in.

Stuart Hogg will not be back for the visit of Wales on Saturday as he continues to receive treatment for the shoulder injury that forced him off early against Ireland in Scotland's second game of the tournament.

But forwards coach Danny Wilson admits the influx of players at training was a welcome boost.

"It's great to add them to the squad," he said. "It's been well documented some of the players who have been in and out of the squad with some of the injuries we have had.

"Finn is in camp, training today, and all good, so he will be working hard towards the weekend."

Scotland are looking to avoid a hat-trick of defeats and Wilson is adamant there will be no shortage of motivation despite Wales having more obvious goals to chase.

"It's about an improved performance from the France game," he said. "We have been pretty honest in camp. Our performance wasn't of the standard we have produced. We have moved on now and we are preparing for Wales.

"It's first about improving that from a home fixture point of view and then getting things tactically right to play a very good side.

"The motivation levels should be through the roof to play a side that's looking for a Grand Slam. It's an exciting fixture for all.

"This is an extremely passionate group of players. As a collective, as coaches and players, we weren't happy with our performance last weekend against France and we have come back very keen to put that right.

"That starts with a performance full of identity and passion and we will need to be physical against Wales, who pride themselves on their physicality. That aspect is a huge, huge area we will focus on."

Eight players have dropped out of the squad. Scrum-half George Horne (shoulder), prop D'arcy Rae (ankle), hooker George Turner (concussion) and centre Chris Dean (back) miss out through injury while prop Alex Allan, back-row forwards Rob Harley and John Hardie and stand-off Duncan Weir have been allowed to return to their clubs.