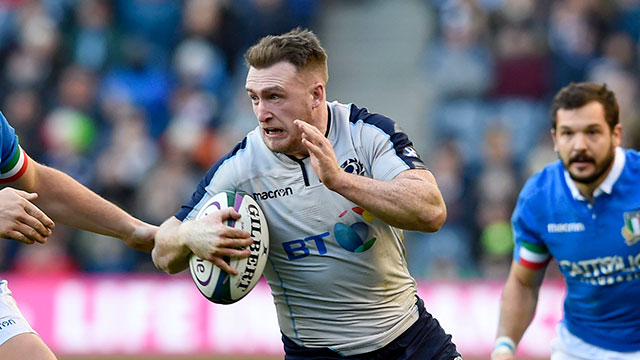 Scotland coach Gregor Townsend is keeping his fingers crossed for good news as Stuart Hogg prepares to see a specialist about his injured shoulder.

The Dark Blues' star full-back was forced off just 17 minutes into Saturday's Six Nations clash with Ireland following a collision with Peter O'Mahoney.

His absence for the rest of the Murrayfield clash proved a major blow for Townsend's team as they struggled for firepower after the break, eventually slumping 22-13.

There were further worries for the Scotland faithful on Tuesday morning with reports claiming Hogg's injury might now force him out of the final three fixtures with France, Wales and England and potentially his final six months with Glasgow before making a switch to Exeter this summer.

But Townsend says he will wait to hear from a medical expert set to examine Hogg on Wednesday afternoon before making a final call on his participation in the rest of competition.

"Well it's news to me that he's out for the Six Nations as we're still waiting to see how he recovers," said Townsend. "He's about to see a specialist later today (Tuesday) so we'll know more about his chances of playing over the next few weeks after that.

"I'm very hopeful that he'll get good news and that he'll be available to play some part in the Six Nations."

If Hogg does fail to recover in time to feature, Townsend insists he is happy enough with his cover at 15.

The British and Irish Lion was replaced by Blair Kinghorn against last year's Grand Slam winners.

The young Edinburgh back scored Scotland's first ever Six Nations hat-trick from the left wing against Italy in their tournament opener, and Townsend said: "Blair obviously had a great game against Italy. He backed that up on his first touch as he got through the Ireland defence on Saturday and being heavily involved in the second half.

"It was just a pity that we didn't get that multi-phase game that we got in the first half that would have allowed someone like Blair to get on the ball more.

"We've got good strength and depth in the back three. We've got Darcy Graham who has been playing really well for Edinburgh. Tommy Seymour and Sean Maitland have both played at full-back and are both very experienced players.

"I believe Byron McGuigan is back for his club this week, so if Stuart is missing - and I really hope that's not the case - then we do have other players who have played international rugby and are in really good form."

O'Mahoney's off-the-ball tackle left Hogg clutching his shoulder in some discomfort but it was just as painful for the rest of his team as Ireland pounced on his lack of mobility to score a second try.

The Munster flanker faced no action from referee Romain Poite at the time and as yet has not been the subject of retrospective disciplinary proceedings, even though Townsend feels there is plainly a strong case to do so.

Speaking as his squad held an open training session in front of 2,000 fans in Clydebank, the head coach said: "It's clearly a penalty and potentially worse because a player has tackled somebody without the ball and not used his arms to tackle. It was a late tackle as well.

"It's really disappointing because it wasn't checked. (The officials) could have gone back because it led to the try, so the TMO should have come in to check an incident that I'm sure the referee wasn't 100 per cent clear on as it happened so quickly.

"It's even more disappointing as we lost a player who would have covered the kick as well as the same player for the rest of the game through injury."