Scotland hopeful to have Finn Russell against France 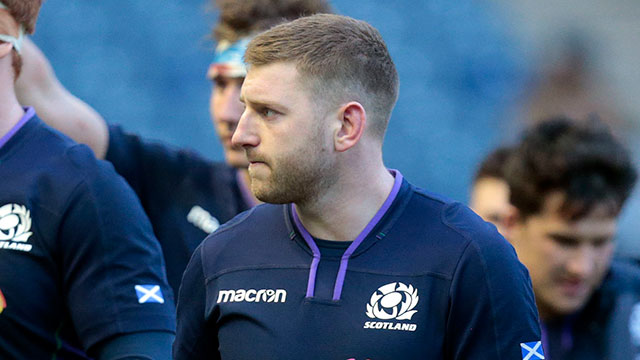 Finn Russell has given Scotland hope that he may face France on Saturday despite going off with a head injury in Paris on Sunday.

The fly-half failed an initial head injury assessment after going off just before the break in a Top 14 encounter for Racing 92 against Toulouse.

But he was symptom-free after he arrived in Edinburgh on Monday morning and observed a light, mainly tactical training session at Scotland's camp.

Scotland will definitely be missing Stuart Hogg in Paris through a shoulder injury but there remains hope that Russell, their other main creative threat, will be able to play in his home city given the minimum return to action is six days.

Forwards coach Danny Wilson said: "He's with us, in the training group. Obviously he didn't meet the criteria to return to the field of play on Sunday, so from there on it's an assessment process which, with our excellent medical staff, will go through for the next few days.

"Six days is Saturday. There is a protocol and a system that all players go through. We just have to go along with our outstanding and very experienced medical staff who will make the relevant calls and decision. It's early days."

Wilson was philosophical about the fact Russell started six days before being due back in Paris, while most of his international team-mates were rested by Glasgow and Edinburgh.

"It's the way of the world in terms of players who don't play in their home countries," he said. "As we know, players are playing all over Europe and that's just something we have to get on with, something that happens."

If Russell fails to make it, Gregor Townsend's options include Adam Hastings and Peter Horne, while Worcester's Duncan Weir was among six players called up to join the squad.

And Wilson is "very confident" Scotland could cope without their most enigmatic talent.

"It's not down to one person," he added. "We all know that Finn is an outstanding rugby player. I've been really impressed with him, his attitude and his leadership in my short time with Scotland.

"But I've also been very impressed with a lot of other players. If the likes of Finn or others are unavailable it provides opportunities for other boys.

"In the long term, there is something to gain from that in terms of international experience, Six Nations experience, going into a World Cup year."

Hogg has been ruled out of the France game after suffering a shoulder injury last time out against Ireland, but he will be monitored with a view to returning later in the tournament.

"Hoggy is not with us this week," Wilson said. "At the moment it's a short-term injury that will be treated, go through the right protocols and hopefully we'll get him back as soon as we possibly can."