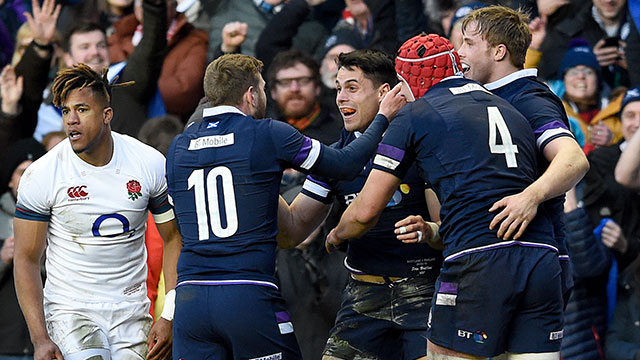 Scotland registered their first victory over England in a decade to reignite their Six Nations title aspirations and leave the champions nursing a conclusive 25-13 defeat.

The Scots had waited 14 years to score a Calcutta Cup try at Murrayfield and, when it finally arrived, it was the first of three as Eddie Jones' men were run ragged in an electric Test inspired by home endeavour.

Huw Jones left his calling card on England with two of the touch downs and his power at outside centre repeatedly rattled a defence that has rarely been in such disarray.

A 22-6 lead had been compiled by half-time, leaving Jones' pre-tournament questioning of Scotland's lateral offence and ability to deal with expectation looking ill-judged.

Instead the "darlings of European rugby", as Jones described them, were magnificent as they matched their willingness to attack with a steely resolve that meant England were out-hustled throughout.

Owen Farrell crossed early in the second half but it was a lone shot as Dylan Hartley marked the occasion of becoming his nation's second most capped player behind Jason Leonard with a painful loss.

Reports emerged shortly before kick-off that Farrell had been involved in a scuffle as the teams entered the tunnel once the warm-ups had been completed, team-mates intervening as peacemakers.

It set the scene for a captivating 138th instalment of the sport's oldest international fixture, but from the start it was Scotland who produced most of the fireworks.

Breaks from Tommy Seymour and Stuart Hogg induced a roar from Murrayfield, but the real work was being done at close quarters where the Scots were winning the majority of the collisions.

England worked deep into home territory and were rewarded by two Farrell penalties, but their whitewash was breached in the 16th minute when Jones hacked on Finn Russell's grubber and pounced when Jonathan Joseph failed to gather the ball.

Just after the half hour mark Scottish ambition conjured a second try.

Starting from inside their 22, they first tested the left wing before a long pass from Russell swept play to the opposite touchline where the rampaging Jones found acres of space.

And when accurate handling directed the ball back to the side where the attack began, Sean Maitland dived into the corner while riding a tackle from Anthony Watson.

In contrast to Scotland's clinical touch, England's attempts to make inroads were repeatedly ended by Nigel Owens' whistle just as they were building up a head of steam.

And to compound their problems, a mini collapse in defence three minutes before the interval saw the unstoppable Jones run on to Greig Laidlaw's pass and maraud through the midfield to touch down as Mike Brown and Watson made desperate late tackles.

England replied quickly after half-time when Farrell was able to run through a large hole and they thought they had scored on two further occasions only to be pulled back by Owens.

Scotland went back on the offensive and their cause was aided when Sam Underhill was sin-binned for a no arms tackle, allowing Russell to land a penalty that opened a 12-point lead with 14 minutes remaining.