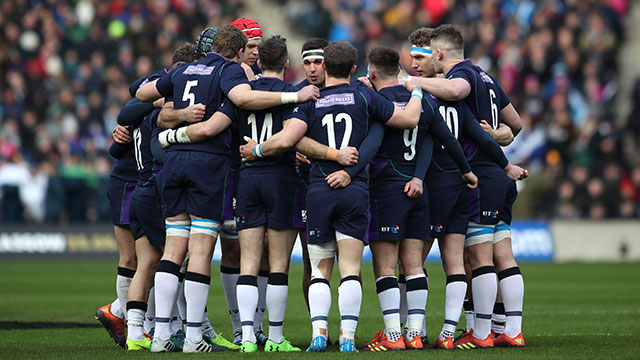 Dropping out are the injured trio of Tommy Seymour, Blair Kinghorn and Jamie Ritchie plus Peter Horne, while Josh Strauss and Jonny Gray move to the bench.

Scotland head to London hoping to arrest a run of three straight defeats but they have not beaten England at Twickenham since 1983.

Townsend said: "First of all we have to build on the positive aspects of our performance from last weekend against Wales, when we were able to generate quick ball and build a lot of pressure on the opposition.

"The character and fitness the players displayed in the second half showed what the team is capable of against one of the best sides in the world. The next step is making that pressure count on the scoreboard, more regularly.

"Winning away from home tends to be achieved through an outstanding defensive performance and we are determined to deliver that this Saturday. At times against Wales we weren't aggressive or accurate enough so that has been a focus for us this week in training."

England's Grand Slam bid was wrecked by defeat to Wales but they can still claim the title if Warren Gatland's side slip up at home to Ireland.

Townsend added: "England are a quality side and have been playing really well throughout the championship.

"They have shown a different game plan this season which is built on power, both through direct ball carrying and also getting off the line in defence.

"They've kicked the ball more than any other team in the Guinness Six Nations, which has worked well for them and produced tries, and it also shows that they are more than comfortable defending for several phases."

Townsend has had to contend with a nightmare injury list this campaign but backed the men he has available to put up a fight against Eddie Jones' team.

"Both Sam Skinner and Ben Toolis started for us against Italy and deserve another opportunity to show what they can do in a blue jersey," Townsend said.

"While it's tough on Jamie to miss this game through injury, we're delighted to bring back Hamish Watson into the starting line-up. He made a real impact on Saturday and we have no doubt that he's ready to take the game to the opposition in attack and defence.

"Sam brings a lot of set-piece nous and gives us good balance in the back-row and we are keen to give Magnus Bradbury an opportunity to start at number eight.

"Sam Johnson gets an opportunity to build on his strong performances against Italy and Ireland, while it's good to have Sean Maitland back in the back three alongside Darcy Graham and Byron.

"These three players, and the team as a whole, will have to put in a lot of work off the ball to counter this threat on Saturday."