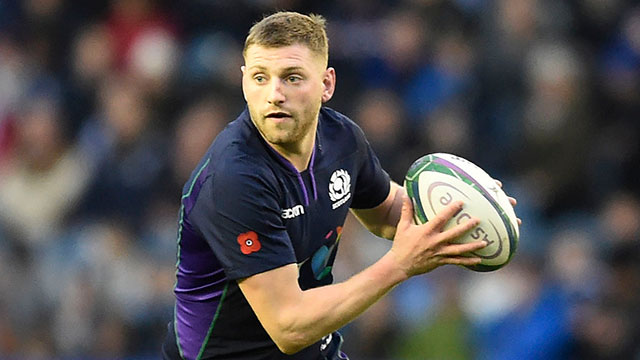 Finn Russell will return to Scotland action against Wales on Saturday.

The Racing 92 playmaker was badly missed a fortnight ago as he sat out the Dark Blues' Six Nations defeat to France in Paris having suffered a head knock on club duty.

Russell takes over from Pete Horne for the visit of Warren Gatland's men while the team will be skippered by Stuart McInally. Regular captain Greig Laidlaw is replaced by Ali Price at scrum-half.

Head coach Gregor Townsend said: "Getting to 50 caps for your country is a milestone in a player's career and it underlines the consistency and quality both Tommy and Jonny have delivered for Scotland over the years."

"Tommy has started all his games and has an impressive try-scoring record, which is a fundamental element of the game for a winger.

"As well as his finishing ability, his excellent work rate off-the-ball and outstanding aerial skills have been the key reasons why he's reached a half century of appearances for Scotland.

"Jonny is an exceptional player who came through as a young man and, by becoming the second-youngest player to win 50 caps, shows just how well he's played in that relatively short time.

"He has a phenomenal work rate, is a very accurate tackler and takes real pride in helping the team prepare, as well as continually looking for ways to improve his own game."

Scotland are looking to bounce back after successive defeats to Ireland and Les Bleus but Townsend knows Grand Slam-chasing Wales present another major hurdle.

He said: "Wales have a very good record against us and are in excellent form. It's a similar challenge to the one we faced last year against England, who had also been on a very good run of results in their preceding games.

"We rose to the challenge that day and found a way to win and I firmly believe we can reach that level of performance once again on Saturday."