Scotland's Huw Jones to miss remainder of the Six Nations 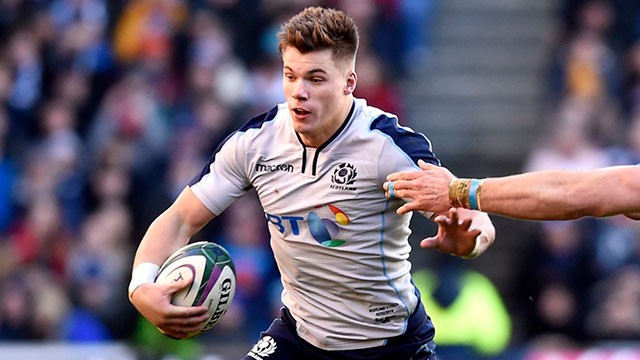 Scotland centre Huw Jones has been ruled out for the rest of the Six Nations due to the knee injury sustained against Ireland last weekend.

Jones, 25, started Scotland's first two matches at outside centre, in the opening 33-20 win against Italy and last Saturday's 13-22 defeat to Ireland.

"Scotland centre Huw Jones is unlikely to play any further part in the 2019 Guinness Six Nations," Scottish Rugby said in a statement.

"The Glasgow Warriors midfielder sustained knee ligament damage in the national team's round two defeat to Ireland at BT Murrayfield Stadium on Saturday, with scan results suggesting the injury recovery time would likely be beyond the reaches of the current campaign."

"Full-back Stuart Hogg damaged shoulder ligaments early in the first-half of the same game and is now under the joint care of the Glasgow Warriors and Scotland medical teams, with his rehabilitation progress and review ongoing," Scottish Rugby added.

Scotland are third in the Six Nations table behind leaders England and Wales and their next match is against France in Paris on Saturday, February 23.