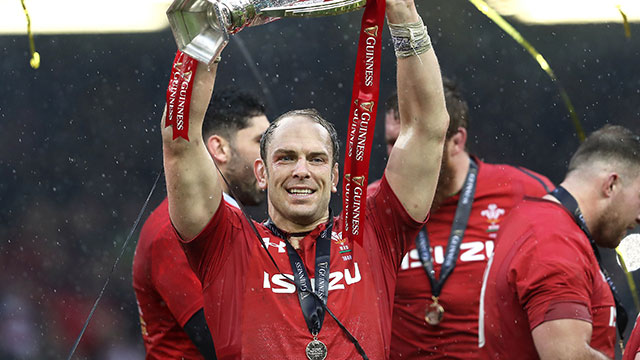 Alun Wyn Jones has been named 2019 Six Nations player of the Championship after leading Wales to the third Grand Slam of the Warren Gatland era.

Jones polled higher in the public vote than team-mates Hadleigh Parkes, Josh Adams and Liam Williams, while England duo Jonny May and Tom Curry were also on the six-strong shortlist drawn up by the media.

The 33-year-old second row was at the heart of Wales' first tournament clean sweep since 2012.

"I'm very flattered. For me as Wales captain it's a validation of what we've done as a squad throughout the campaign," said Jones, who received a newly-sculptured trophy.

"To be up there as a nominee with three other Welsh players and two outstanding players from England would have been more than enough and I'm very grateful to the people who have taken the time to vote."

It was during the recent Grand Slam march that Jones broke the previous milestone of 61 for most Test wins in a Wales jersey by any player and he has amassed 134 caps for Wales and the British and Irish Lions, equalling Gethin Jenkins' record combined total for the same teams.

He is now only the fourth Wales player to win three Six Nations Grand Slams, following in the footsteps of Jenkins, Ryan Jones and Adam Jones.

Jones succeeds Ireland's Jacob Stockdale as winner of player of the year and becomes the fifth Welshman to be acclaimed since Gordon D'Arcy - also of Ireland - landed the inaugural award in 2004.

England finished runners-up hence the inclusion of May, who finished top try scorer with six, and the Six Nations' outstanding openside in Curry.