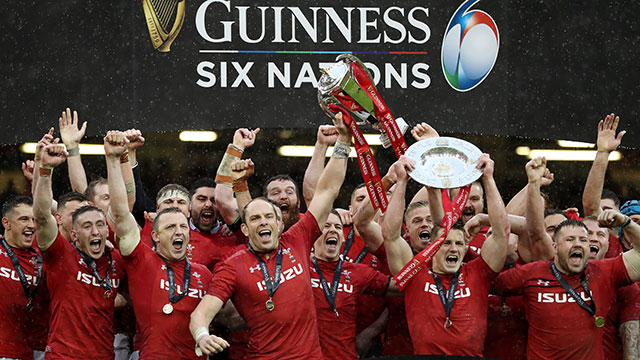 Wales boss Warren Gatland hailed players who "will run through a brick wall for you" after they demolished Ireland 25-7 to be crowned Six Nations Grand Slam champions.

Wales made it 14 games unbeaten and gave head coach Gatland a record third clean sweep in his final Six Nations game at the helm.

An outstanding Gareth Anscombe kicked 20 points - six penalties and the conversion of centre Hadleigh Parkes' second-minute try - to sink Ireland in swirling rain under leaden skies on an afternoon when the visitors insisted the Principality Stadium roof remained open.

Wales climbed above Ireland to hold second spot in rugby's official world rankings, and they will head to the World Cup in Japan later this year - Gatland's swansong - as major title contenders.

"This group of players will run through a brick wall for you," Gatland said.

"I am excited for the World Cup because you get two or three months together and you can prepare like a club side.

"You can go into a lot of skill development and really fine-tune your game. From that point of view, we will be in great shape.

"In our previous two World Cups (Gatland was in charge of), we were one of the fittest teams in the World Cup.

"We will be in good shape for this one as well."

Gatland predicted that Wales would win the Grand Slam if they beat France in their opening match, and they fought back from 16 points adrift to win that game.

Six weeks later, they led 16-0 at half time and dominated Ireland in a way rarely seen against Joe Schmidt's team during recent seasons.

Gatland added: "It's nice when predictions come true, isn't it?

"I've got to have that belief and self-confidence in us, and if I can portray that on to the players in some small way then hopefully they can believe it as well.

"It was a great performance today. The boys thoroughly deserve it. Creating history and winning Grand Slams are things nobody can ever take away from you.

"I thought they were exceptional in the way they managed the game. Our physicality nullified what have been Ireland's strengths in scrum, lineout and runners off nine.

"Our turnover rate, compared to them, gave us that dominance, particularly in that first half

"Emotion plays a huge part in big games like that. For our group of players, they knew they were playing for first or third place.

"The Irish players probably didn't expect England to lose to Scotland, so in their heads they were playing for second or third. That has a significant impact in those small percentages.

"You are at home, there is a tidal wave of support behind you, and it built.

"I will miss the atmosphere of a full house, coming in on the bus, the fans and the celebrations afterwards.

"I think I will enjoy that (winning three Grand Slams) afterwards, but the game is always about the players, and we stress that."

Wales captain Alun Wyn Jones said: "We are managing games better and working on these things. Belief is something you have to earn, and we are doing that.

"We have put a big target on our back for a lot of other teams, and you have to be comfortable with the pressure that comes with that."

"When you see young men come into the side and see them grow over an eight or nine-week period... I can't tell these guys what to do, given the way they are performing.

"I've been involved in regional rugby and all its deficiencies, but it must be doing something right, because these guys are doing a job.

"I'm just really proud for such a small nation to be able to do that. It's very simple, and that was the message before the game, to be proud and represent who you are."

On his coach, he added: "He has been pretty prolific, not just with Wales but with the other red jersey (British and Irish Lions) as well.

"He has got a bit left on his contract, so he can't take his foot off the gas yet. But his record speaks for itself - three Grand Slams."