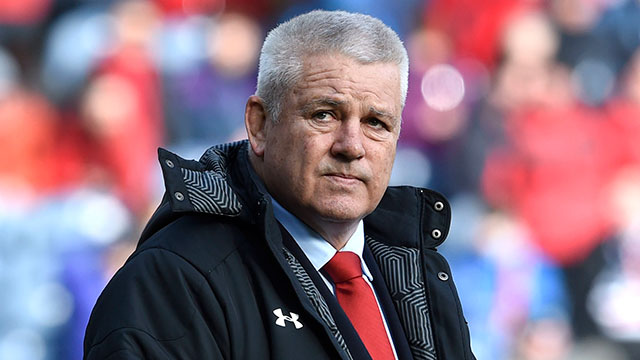 Warren Gatland admits "the prize is massive" when Wales go for Six Nations title and Grand Slam glory against Ireland in Cardiff on Saturday.

And Wales head coach Gatland says it will be about embracing the occasion and "not running away from it".

Gatland has named an unchanged team as his unbeaten tournament leaders chase a first Six Nations title since 2013 and first Grand Slam for seven years.

Full-back Liam Williams has recovered from a shoulder injury that forced him off against Scotland last weekend to start.

Gatland will oversee his 50th Six Nations match and is bidding to become the first coach in Five or Six Nations history to mastermind three Grand Slam triumphs, while skipper Jones equals prop Gethin Jenkins' appearance record for Wales and the British and Irish Lions of 134 Tests.

If Wales slip up, Ireland will win the Six Nations with victory if Scotland beat England at Twickenham on Saturday.

Ireland were the last side to topple Gatland's men 13 months ago, since when Wales have embarked on a national-record 13 successive Test wins.

"We have spoken all week about embracing it and not running away from it," Gatland said.

"You get opportunities that come along in life, and you have to take it with both hands.

"I have said to this group of players you might never get a chance like this again and you don't want to let those opportunities pass you by.

"I have not seen a group of players as motivated as this before and this excited about playing in a Grand Slam game, wanting to win and put that jersey on and play for themselves and their families and Wales as a whole and what it means to the country.

"We know what is at stake, and the prize is massive."

Saturday's encounter will be the final Six Nations game for Gatland and his coaching lieutenants like Rob Howley and Shaun Edwards, as they all leave their posts after the World Cup in Japan later this year.

But Gatland added: "It is not about us, it is about the players for this weekend. We have done all the work we can, and I get more of a buzz out of seeing the excitement on players and seeing them celebrate afterwards.

"That's what I want to see, and for us it's about trying to stay level-headed over the next couple of days and be concise in what we deliver to the players so we are not too emotional.

"I can guarantee you on Saturday, if we do win, there will be plenty of emotion afterwards."

"He has matured gracefully," Gatland said.

"In the early years he was a bit hot-headed and temperamental, and he was the one starting the fights in training and stuff, and that is what a competitor he is.

"I just want to say what a fantastic job he has done this year in terms of leading the team.

"I know he was thinking potentially about when he was going to call time on the game, but he is feeling pretty good at the moment so Wales might get a few more years out of him.

"He has been very important to us, he is a player who does not pick up many injuries and he has been a constant."