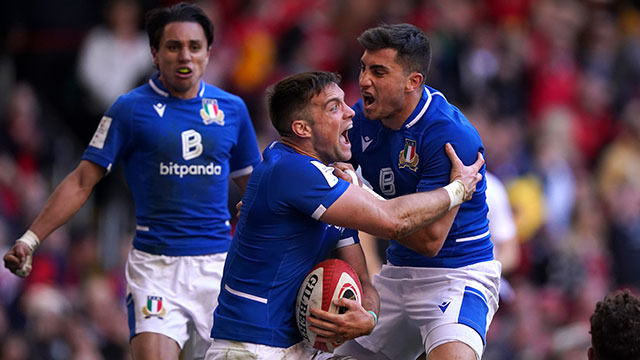 Wales ended their Six Nations campaign with a humiliating defeat as Italy stunned them 22-21 at the Principality Stadium.

Last season’s champions had hoped to give milestone men Dan Biggar and Alun Wyn Jones a day to remember.

Skipper Biggar became the seventh Welshman to collect 100 caps, while Jones clocked up 150 Wales appearances, making him the first player in international rugby union history to reach that figure.

But the script was torn up by an Italian side that claimed a first Six Nations victory for seven years that ended a run of 36 successive losses in the competition.

It was also their first triumph on Welsh soil and ended a run of 16 successive defeats to last season’s Six Nations champions.

Italy clinched a spectacular triumph a minute from time when full-back Ange Capuozzo attacked from inside his own half, and Edoardo Padovani claimed a try that Paolo Garbisi converted to spark wild scenes of Azzurri celebration.

Padovani had earlier kicked two penalties and Garbisi three as Wales were grounded despite perfect conditions and glorious sunshine in Cardiff.

Owen Watkin, Dewi Lake and Josh Adams scored tries for Wales, with Biggar converting all three, but it will go down as one of the darkest days in their history after losing to the regular Six Nations wooden-spoonists.

Wales head coach Wayne Pivac made seven changes following a narrow defeat against France last time out, including a first Test start for hooker Lake, while full-back Johnny McNicholl, centre Uilisi Halaholo and prop Dillon Lewis were also among those called up.

Italy made a bright start, with wing Monty Ioane putting early defensive pressure on McNicholl, and it took Wales 10 minutes before they could establish any kind of threatening position inside the Azzurri’s 22.

But that opportunity was wasted after Lake, making his first Test start, overthrew an attacking lineout and Italy launched possession back downfield before Garbisi booted a 48-metre penalty to open the scoring.

Padovani then doubled Italy’s advantage, matching Garbisi’s long-range strike, and there was a look of lethargy about Wales, underlined when wing Louis Rees-Zammit spilled a scoring pass from McNicholl.

Wales finally stirred 12 minutes before half-time, with Watkin applying a high-class finish following impressive approach work by Rees-Zammit and his fellow wing Adams, before Biggar’s conversion made it 7-6.

But the lead was short-lived, as Wales’ poor discipline allowed Italy chances from distance, and Garbisi and Padovani each kicked penalties from distance during a three-minute spell, giving Italy a five-point advantage.

Wales proved to be their own worst enemies, coughing up possession through poor handling and positioning, with Italy not requiring a second invitation to capitalise on such elementary errors.

Ioane put them back on the front foot as half-time approached, breaking clear from just inside his own half, and Italy finished strongly, securing a 12-7 interval lead.

Wales boss Wayne Pivac made a half-time change, sending on prop Leon Brown for Lewis, while Nick Tompkins replaced Halaholo within five minutes of the restart, as Ioane was then only denied a try by Adams’ brilliant cover-tackle.

Wales went ahead after 52 minutes, though, when they drove a close-range lineout and Lake touched down for a try that Biggar converted.

But the outstanding Ioane responded by launching a thrilling counter-attack, then Wales infringed inside their own 22 and Garbisi completed his penalty hat-trick to make it 15-14.

Jones played for an hour on his first appearance more than four months after suffering a shoulder injury, being replaced by Will Rowlands, and Callum Sheedy took up fly-half duties as Biggar moved to full-back instead of McNicholl.

Adams sprinkled a bit of magic on proceedings with his clinching score, but it was a forgettable performance by Wales that provided little cause for optimism ahead of a three-Test South Africa tour in July, with Padovani and Garbisi combining to complete their misery.