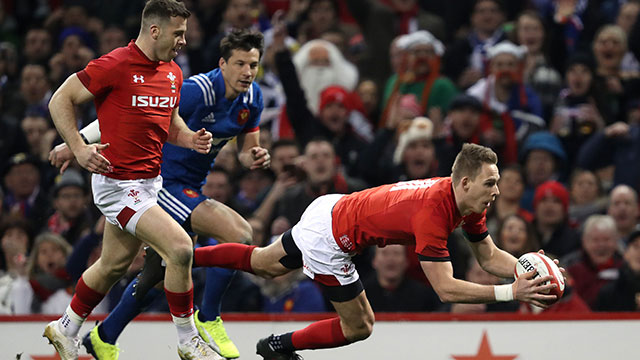 Wales secured runners-up spot in this season's Six Nations Championship after edging out France 14-13 at the Principality Stadium.

A Liam Williams try and three Leigh Halfpenny penalties swayed a forgettable contest Wales' way as they completed a clean sweep of home wins in this season's tournament.

France went the same way as Italy and Scotland before them, yet the visitors could - and probably should - have taken the spoils, given their dominance for much of the match.

Wing Gael Fickou's try, an early Francois Trinh-Duc drop-goal, plus his half-back partner Maxime Machenaud's penalty and conversion ensured that Wales were stretched to the limit.

But a combination of Welsh resilience and French profligacy meant the game ultimately went Wales' way, leaving France still without a win in Cardiff since 2010.

Wales failed to score a point after the 30th minute, leaving head coach Warren Gatland with plenty to contemplate ahead of summer appointments with South Africa and Argentina.

The victory, though, also meant that England finished fifth in this season's Six Nations on the back of successive defeats against Scotland, France and Ireland.

France flew out of the blocks and Trinh-Duc put them ahead through a smart drop-goal after four minutes that rewarded their promising start.

But the Toulon playmaker soon turned from hero to villain, making a complete hash of his work in defence after Wales centre Scott Williams sent through a teasing kick, with Liam Williams collecting the bounce for his team's opening try.

Halfpenny missed the conversion, yet he soon found his range by landing an angled penalty as Wales took an 8-3 lead following a lively opening that showcased adventure from both sides.

A second Halfpenny penalty extended Wales' advantage, but France hit back in scintillating style through a try that owed everything to slick handling and lung-busting support play.

Fickou began the move just inside his own half, and it was taken on at pace by hooker Adrien Pelissie and lock Paul Gabrillagues, before quickly recycled possession ended with Fickou touching down at pace, having crossed from the opposite wing.

Machenaud added the conversion, only for Halfpenny to complete his penalty hat-trick 10 minutes before the break as both sides continued to probe for attacking space during an entertaining contest.

The French scrum-half, though, missed a penalty on the stroke of half-time, and Wales held a four-point advantage at the midway point in the battle for second place.

Wales, despite the odd charge from outstanding number eight Taulupe Faletau, could not establish any kind of territorial foothold in the French half, and even with 20 minutes to go, it looked as though they were hanging on.

France continued to monopolise possession, denying Wales front-foot ball, yet their own attacking limitations were also exposed as the ball too often failed to find Fickou or his fellow wing Remy Grosso.

Trinh-Duc then missed a straightforward penalty that would have nudged France ahead - Machenaud had been replaced five minutes earlier - and Wales survived as a dreary, error-strewn encounter lurched towards its conclusion.