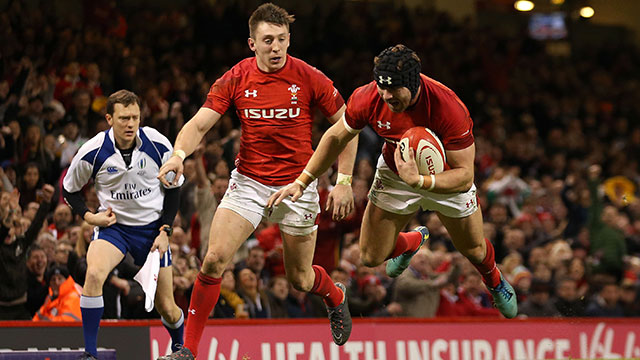 Wales made a flying start to the Six Nations as they blew Scotland away 34-7 in Cardiff.

The Scots, without a win in the Welsh capital since 2002, never recovered from conceding tries inside the first 12 minutes to Wales scrum-half Gareth Davies and full-back Leigh Halfpenny.

Halfpenny claimed a second touchdown after half-time and added four conversions and two penalties for a 24-point haul, before wing Steff Evans' try secured a five-point maximum as Scotland's recent resurgence came to a grinding halt.

Substitute back Peter Horne scored a consolation 79th-minute try for Scotland that Finn Russell converted, but the damage had long been done.

Wales' triumph marked Warren Gatland's 10th anniversary as head coach in style, although bigger challenges now await in the shape of reigning Six Nations champions England at Twickenham next weekend, then Ireland at the Aviva Stadium.

Despite their injury troubles, Wales hardly missed a collective beat.

They repeatedly rocked Scotland back on their heels through outstanding performances from the likes of lock Cory Hill, flankers Aaron Shingler and Josh Navidi, plus Rhys Patchell on his first Test start as fly-half.

Scotland, in contrast, lost all the the key battles, struggling up front and not being able to shackle Wales' broken-field runners on what was a sobering occasion for them.

Attacking forces like full-back Stuart Hogg and centre Huw Jones could not get into the game, and Wales were never seriously troubled on an afternoon when scoreline emphatically summed up their degree of dominance.

Although Wales gained a penalty to relieve the danger, Scotland had made their intention clear to put pace and width on the ball, yet the home side stung them through a 60-metre breakaway score when Gareth Davies caught his opposite number Ali Price's pass and sprinted clear.

But it was only a temporary reprieve as Wales sacrificed a kickable penalty for an attacking scrum, and then making it pay as they exposed Scotland defensively and Halfpenny claimed his first Wales try for five years, before his conversion made it 14-0 after 12 minutes.

Scotland inevitably took time to recover their composure following the ferocity of Wales' start, yet even when they had possession it was mostly from unthreatening positions, and they remained scoreless as half-time approached.

And there were only five minutes to the break when Wales came under sustained pressure for the first time, facing a five-metre attacking Scottish scrum, but a handling error in midfield thwarted the Scots and Wales surged upfield through centre Hadleigh Parkes' lengthy touch-finder.

Wales began the second period in untroubled mode, as two Halfpenny penalties during a five-minute spell took them 20 points clear before Scotland boss Gregor Townsend made a triple substitution, including an appearance for scrum-half and former Test captain Greig Laidlaw.

But it made no difference to the overall picture as Halfpenny went over for his second try, adding the conversion to end things as a contest and confirm Townsend's Six Nations coaching debut as one to forget.

Steff Evans then sealed the deal through a spectacular diving one-handed finish, with Halfpenny's conversion ending Scottish misery and sending Wales to London next Saturday in confident mood.

LEIGH HALFPENNY: Pivotal to Wales' victory, amassing 24 points, including two tries as he revelled in a dominant display. 8/10

JOSH ADAMS: Had few chances to shine on his Test debut, but looked sharp when he had the opportunity. 7

SCOTT WILLIAMS: Rock-solid in defence as Scotland's much-vaunted back division never got out of first gear. 7

HADLEIGH PARKES: Only his second Wales appearance, but he already looks like a seasoned veteran. 7

RHYS PATCHELL: An accomplished and assured contribution on his first Test start as Wales fly-half. 8

GARETH DAVIES: Set the ball rolling with an early interception try, and was consistent in all aspects. 7

ROB EVANS: Superb in the set-piece exchanges and outstanding around the field. A high-class contribution. 8

KEN OWENS: Among 10 Scarlets in Wales' starting line-up, he gave a trademark display of solidity. 7

SAMSON LEE: Made a considerable scrummaging difference on his return for Wales after injury. 7

CORY HILL: The Dragons lock had his best game for Wales. Impressive in all areas. 8

ALUN WYN JONES: The Wales captain led from the front, and was at heart of many of his team's best moments. 7

AARON SHINGLER: A towering performance by the Scarlets flanker, and Scotland could not handle him. 9

JOSH NAVIDI: Continued from where he left off in the autumn with another top-drawer display. 8

ROSS MORIARTY: A Herculean effort on only his fourth appearance of the season after serious injury. 7

Replacements: Wales head coach Warren Gatland could use his substitutes with comfort in the second period, and all of them settled seamlessly into his team's dominant playing pattern. 7

STUART HOGG: Scotland's most dangerous attacker hardly saw the ball, such was the back-foot nature of his team's afternoon. 6/10

TOMMY SEYMOUR: Like Hogg, spent most of the match as a frustrated onlooker as Wales dominated. 6

CHRIS HARRIS: Struggled badly in Scotland's midfield, and was taken off early in the second half. 5

HUW JONES: Some uncharacteristic errors from the highly rated Scotland centre, who found Scott Williams and Hadleigh Parkes a handful. 6

BYRON McGUIGAN: Never got into the game as Wales offered a sparkling lesson in broken-field running and support angles. 5

FINN RUSSELL: Could do little to stem the Wales tide as he spent the whole game in retreat. 6

ALI PRICE: Saw his pass intercepted by opposite number Gareth Davies for Wales' try, and he never recovered. 5

GORDON REID: Battled valiantly, but it was to no avail as Scotland's front row found it tough going. 5

STUART McINALLY: Did his best around the field, and was prominent at times, but Scotland were blown away. 6

JON WELSH: Like Reid, could never get going as the Welsh pack dominated throughout. 5

BEN TOOLIS: Called up instead of an injured Richie Gray, but could make little impression. 5

JONNY GRAY: A strong first half by the Glasgow lock, and he was arguably Scotland's best player. 7

JOHN BARCLAY: The Scotland skipper could only look on as his Scarlets colleagues in the Wales team enjoyed a field day. 6

HAMISH WATSON: Had a game to savour when Wales arrived at Murrayfield last season. Could not repeat it, though. 5

CORNELL DU PREEZ: Hauled off in the second half as Scotland were just not at the races. 5