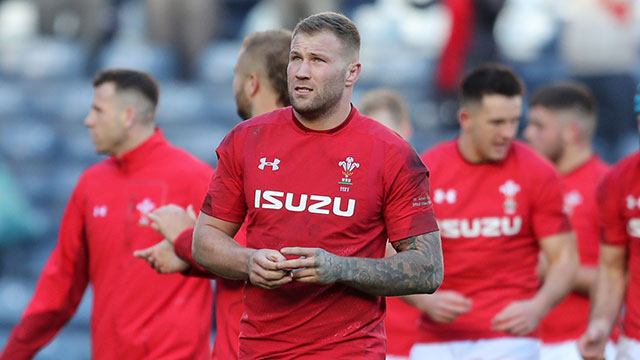 Ross Moriarty says Wales are "ready to go again" for the final push of their Six Nations title and Grand Slam bid.

Ireland stand between Wales and a first Six Nations clean sweep for seven years when the fierce rivals clash in Cardiff on Saturday.

"Apart from winning a World Cup, it is the biggest thing for anyone in northern hemisphere rugby, so I would be really happy to achieve one," Moriarty said.

"We've been building nicely over 13 games (unbeaten), and against Ireland, we won't take a backward step to try and continue the streak.

"They are a good team, and we know what they are capable of."

Wales put themselves in a position to challenge for European rugby's biggest double prize by repelling a fierce second-half onslaught from Scotland at Murrayfield on Saturday.

An exceptional defensive display underpinned Wales' 18-11 success, which means they remain undefeated since Ireland beat them at the midway point of last season's Six Nations.

Moriarty added: "It was a very tough day at the office. We came up short two years ago at Murrayfield but this time we showed a lot of character to pull through.

"You could see the momentum change in the second half, but we showed character with the driving lineouts, big defensive sets and big turnovers.

"We lacked a bit of discipline at times, which gave them the chance to go to the corners, but we will definitely shape up big-time this week now.

"Sometimes, people don't see the hard graft, but against Scotland, it showed across the board with all the forwards and all the backs. It was a big heavyweight slog.

"We've had some difficult games in the Six Nations, but we are ready to go again."

Moriarty has been among Wales' many success stories in this season's tournament, although wing Josh Adams probably tops that particular list.

Adams' sparkling solo try against Scotland was his third in successive Six Nations games, earning many plaudits, including from his fellow wing North.

"He's brilliant," North said. "He is hungry, he wants to learn, he wants to play, he is energetic and he has got an unbelievable skill-set and mindset.

"To be fair to him, every challenge he has been up against, he has fronted up.

"His finish (against Scotland) was his only real opportunity, and he took it with both hands really well. That was a world-class finish by anyone's standard.

"It's great to work alongside him. He asks questions and vice versa. We challenge each other, and hopefully, it brings out the best in both of us."