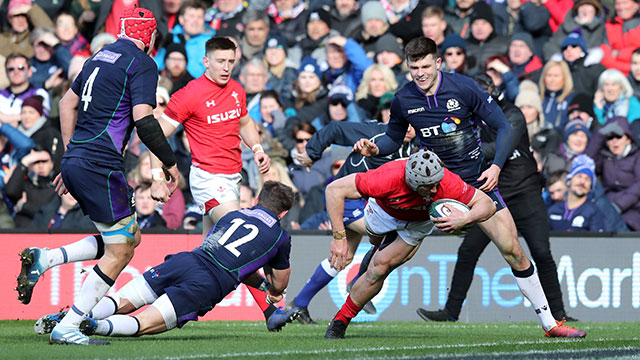 Wales will be crowned Six Nations Grand Slam champions if they beat Ireland next Saturday after surviving a major scare to beat Scotland 18-11 at Murrayfield.

The unbeaten tournament leaders' fourth successive Six Nations victory - and their 13th of a record-breaking winning run - has teed up a mouthwatering occasion in Cardiff.

But they were pushed to the limit by a resilient Scotland team that dominated the second period as Wales were kept scoreless between the 30th and 79th minutes.

Despite a week dominated by rugby politics about the future template for Wales' professional regional game, though, Warren Gatland's men just about put it behind them.

First-half tries by wing Josh Adams - his third in the last three Six Nations games - and centre Jonathan Davies sent Wales ever closer to a first Six Nations crown since 2013 and seven years on from their last Grand Slam, while fly-half Gareth Anscombe added two penalties and a conversion.

But they lost full-back Liam Wiliams with an arm injury that could make him a major doubt to face Ireland, as Scotland threatened a famous victory through wing Darcy Graham's second-half try and two Finn Russell penalties.

Wales showed an enforced change from the side that beat England a fortnight ago, with lock Adam Beard replacing ankle injury victim Cory Hill, while Scotland boss Gregor Townsend made four switches, including starts for Graham and scrum-half Ali Price.

And Scotland started brightly, sourcing quick ball through their half-backs Price and Russell, but they lost a promising attacking position when skipper Stuart McInally was penalised for foul play.

From their first notable attack, the visitors delivered a superb score as slick passing freed Adams near the touchline and he showed outstanding footwork to round Scotland full-back Blair Kinghorn and touch down unopposed.

Anscombe kicked the conversion for a 7-3 advantage after 13 minutes, and although Russell then booted a second penalty, Scotland lost wing Tommy Seymour with what appeared to be a rib injury.

A long-range Anscombe penalty restored Wales' four-point advantage, and they began to move through the gears, utilising outstanding carrying work from the likes of Navidi, Ross Moriarty and skipper Alun Wyn Jones.

And a second try arrived 10 minutes before the break, with Wales patiently going through an impressive phase-game before it was all rounded off by an easy finish for Davies.

The whole move went through 23 error-free phases, and Wales had control - despite Anscombe hitting the post with an angled 25-metre penalty kick - as they led 15-6 halfway through the contest.

Scotland began the second period in front-foot mode, helped by a powerful run from prop Allan Dell, and Wales were forced into a reshuffle when Williams departed injured, with Biggar replacing him and Anscombe moving to full-back.

The Scotland forwards laid siege to Wales' line, and lock Grant Gilchrist was denied a try by some outstanding defensive work as the home side grew in confidence.

And their pressure was rewarded through a fine 58th-minute score for Graham, which owed everything to smart creative work by Russell and replacement Byron McGuigan and concluded a dominant Scottish third quarter that saw Wales' penalty count stack up.

Wales, starved of quality possession and territory, could not get their game going as Scotland continued to dominate during a tense final 10 minutes.

But Scotland could not keep their composure as time ticked down, and a relieved Wales held out as Anscombe kicked a late penalty to set up a huge Principality Stadium encounter in seven days' time.