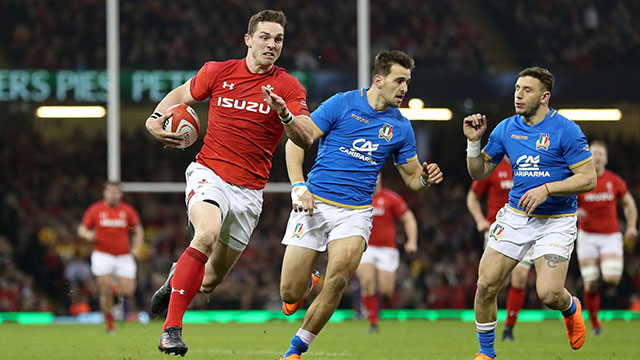 Wales moved up to second in the Six Nations table behind champions Ireland after claiming an expected bonus point victory over Italy.

It was not always plain sailing for Wales before they made it 12 successive wins against the Azzurri, but their superior class and finishing ability ultimately told during a 38-14 triumph.

They replied through a touchdown for full-back Matteo Minozzi that fly-half Tomasso Allan converted, making it 14-7, before Mattia Bellini touched down late on - Carlo Canna added the extras - yet a much-changed Wales team never found themselves under serious threat as North took centre-stage.

Northampton boss Alan Gaffney appeared to question whether North, who was released on schedule by Wales during a fallow Six Nations week, wanted to play for his club in an Aviva Premiership game eight days ago.

But the juggernaut runner added two more touchdowns to an impressive Wales tally, making it 32 and moving just one behind Ieuan Evans on his country's all-time try-scoring list.

Wales averaged 46 points a time in their last four games against Italy, and they made a flying start by posting two converted tries during the opening six minutes.

Parkes bounced off two Italian defenders to claim Wales' opener, then before Italy could regain their composure, Wales centre Owen Watkin cut the Azzurri defence apart from deep and his pass found North, who finished off for his 31st Test match touchdown, with Anscombe adding both conversions.

Any hint of Wales complacency, though, was swiftly removed when Italy responded through a try by Minozzi - he capitalised on hesitant Welsh defensive work - and Allan's conversion made it 14-7 after 10 minutes.

Italy were buoyed by the score, and they kept Wales pinned back before Allan missed a 35-metre penalty chance 10 minutes before half-time.

Wales could not re-establish initial momentum, and they were content to increase their advantage through a 35th-minute Anscombe penalty.

But the home side ended the opening 40 minutes reduced to 14 men when full-back Liam Williams was sin-binned for a dangerous tackle on his opposite number Minozzi, as Wales' early promise continued to show signs of evaporating, even though they led 17-7 at the break.

Wales needed to regroup following a lacklustre second quarter, and they delivered within four minutes of the restart as sustained close-range pressure ended with Hill claiming his first Test try.

Anscombe added the extras, leaving Wales with the best part of 35 minutes to claim a bonus point score.

But they were briefly reduced to 13 players after scrum-half Gareth Davies received a yellow card for a deliberate knock-on, while head coach Warren Gatland sent on Halfpenny as a replacement for Williams.

Italy, to their credit, defended valiantly, never giving up despite conceding more than 20 tries in this season's tournament, but North ensured the five-point maximum when he crossed 14 minutes from time.

And Tipuric confirmed an emphatic success as defensive gaps inevitably began to open, before Italy claimed a consolation try when Bellini was freed on an overlap. But the visitors ended the game a man short as Tommaso Benvenuti received a yellow card for a deliberate knock-on.

LIAM WILLIAMS: Received a yellow card for a dangerous tackle just before half-time, which could yet attract closer scrutiny from the match citing commissioner. 6/10

GEORGE NORTH: Scored two tries to move one behind Ieuan Evans on Wales' all-time list. A threat throughout. 9

OWEN WATKIN: Made a sharp break that created North's opening score, and he could feel pleased with his efforts. 7

HADLEIGH PARKES: Scored a try and rarely put a foot wrong. Italy struggled to contain him. 8

STEFF EVANS: Had few chances with ball in hand, but his work-rate continues to thrive as he grows in the Test arena. 7

GARETH DAVIES: Sin-binned during the second period, but Wales hardly missed him, such was their degree of control. 6

NICKY SMITH: Solid performance on a rare start in the Wales number one shirt. 7

ELLIOT DEE: Continues to impress, and he shone on his first Six Nations start. The 2019 World Cup awaits. 7

TOMAS FRANCIS: Stepped into the starting XV and encountered a few problems opposite an experienced Italian front-row. 7

CORY HILL: Claimed his first try for Wales and retains his status as arguably Wales' most improved player of the past 12 months. 7

JUSTIN TIPURIC: Scored a late try and barely put a foot wrong, featuring in many of Wales' best moments. 7

JAMES DAVIES: Enjoyed every moment of his Test debut, especially in open play during the second-half. 7

TAULUPE FALETAU: Captained Wales for the first time, and a bonus point victory was exactly what his country required. 7

Replacements: Full-back Leigh Halfpenny was the pick of Wales' substitutes, but there proved a solid contribution from all the reinforcements that head coach Warren Gatland required. 7