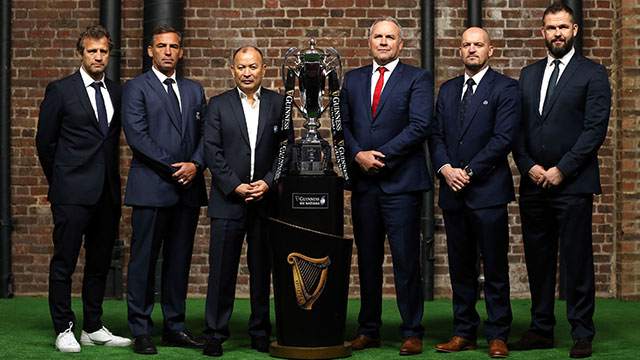 The Six Nations Championship has a cherished and permanent place on rugby union's global landscape.

But as the European game's blue riband tournament prepares for its 2020 edition, there is also an exciting new feel to it.

It might be barely 10 months since Wales signed, sealed and delivered a dream farewell gift to departing head coach Warren Gatland in the form of a Grand Slam, yet so much has changed.

The turnaround in coaches is such that only England boss Eddie Jones and Scotland's Gregor Townsend remain in their positions from last season's Six Nations showpiece.

Gatland's prodigious 12-year Wales reign came to an end after the World Cup in Japan, as did that of his fellow New Zealander Joe Schmidt, who left the Ireland job.

Add Conor O'Shea's departure from Italy and Jacques Brunel stepping down in France, and this year's competition promises to be a whole new ball game.

Wales have entrusted life after Gatland with another New Zealander - former Scarlets head coach Wayne Pivac - while Andy Farrell has been promoted from within to succeed Schmidt, Fabien Gathie has the reins in France, where ex-Wales defence guru Shaun Edwards is among his assistants, and South African Franco Smith leads Italy.

All the newcomers will be looking to make an immediate impression following contrasting World Cup campaigns, and it is what gives the tournament's 21st staging a fresh dimension.

England, unsurprisingly given their status as 2019 World Cup runners-up, are firm favourites with the bookmakers.

It is something they are afforded pretty much for every Six Nations, although the last nine years of championship action have produced an equal three-way split in title terms between England, Wales and Ireland.

England's demolition of World Cup semi-final opponents New Zealand three months ago underlined what a force they can be, and despite being overpowered by South Africa a week later, Jones' men arrive on the Six Nations stage accompanied by familiar expectation levels.

Two of their main rivals - Ireland and Wales - will be faced at Twickenham, and if England emerge unscathed from two early February away days in Paris and Edinburgh, then they could take some stopping.

But imagining the competition as one that might merely be England's to lose, blissfully ignores claims of others - Wales, especially.

Pivac is a rookie in Test match terms, yet a five-year stint at the Scarlets underlined an attacking rugby mantra that is illustrated by his first Six Nations squad.

In addition to a new head coach, Ireland have a change of captain, with fly-half Johnny Sexton taking over from the retired Rory Best.

An injury-free and fully firing Sexton enhances any team he plays in, and Farrell can call on a sizeable contingent of Leinster stars - Sexton included - that marched imperiously through the European Champions Cup pool stages as unbeaten top seeds.

France's Six Nations campaign, meanwhile, could stand or fall on the outcome of their opener against England.

Ireland and France both made World Cup quarter-final exits, but Scotland did not get that far, crashing out at the pool stage when Japan defeated them in Yokohama.

Townsend has turned to full-back Stuart Hogg - Scotland's biggest single attacking threat - to lead the side, yet a lack of consistency remains an issue, and they could find themselves in a scrap with Italy to avoid collecting the wooden spoon.