England could use Cokanasiga against Wales after Ashton suffers injury 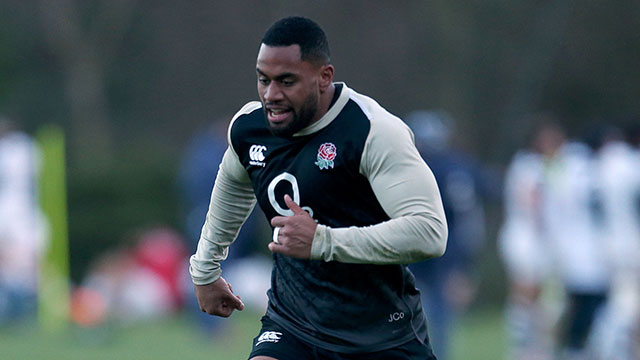 England could unleash giant wing Joe Cokanasiga upon Wales after Chris Ashton was ruled out of Saturday's Six Nations title collision with Wales by a calf injury.

Ashton incurred the damage during the squad's three-day camp in London and will receive treatment at his club Sale, but he is expected to recover in time for the penultimate round against Italy.

The 31-year-old acted as a replacement against Ireland but was promoted to the starting XV against France and completed 51 minutes until he was replaced by Jack Nowell.

Wing has become a position of strength for England and they will be able to absorb the loss of Ashton without too much fuss, even allowing for his formidable strike rate of 20 tries in 44 Tests.

Nowell, who dropped to the bench for France' visit to Twickenham despite excelling in Dublin, is likely to start in the number 14 jersey to place Cokanasiga on course to win his third cap as a replacement.

Cokanasiga is present in the 33-man training squad selected for Wales having continued his comeback from knee ligament damage with a try-scoring performance in Bath's victory over Newcastle on Saturday.

It was the Fijian-born 21-year-old's first outing for over two months and having proved his fitness he is contention for the Principality Stadium clash, most likely in the role of impact substitute.

"I was blowing a bit towards the end but I'm confident in the knee now," Cokanasiga said after Newcastle had been dispatched.

"Eddie just spoke to me about getting some game time and being available for selection for Wales.

"Everything happened so quickly for me in the autumn and I haven't had any time to think about it.

"I've been working hard on my rehab and hopefully I will get that shot against Wales."

Also present in the training squad is veteran Mike Brown and Gloucester's Ollie Thorley, although the uncapped rookie is a fringe contender.

The remote prospect of Maro Itoje facing the only other unbeaten side in the 2019 Six Nations has vanished after the Saracens lock was excluded from the 33.

Itoje was struck down by a knee injury against Ireland and while Jones floated the possibility of him securing a bench spot against Wales, he will continue receiving treatment with a view to facing Italy.

Definitely present in Cardiff will be Elliot Daly, whose attacking instincts at full-back have been influential in England's successful start to the Six Nations.

Daly ran in the decisive try that sealed a dramatic late win in the same venue two years ago after a poor clearance provided the launchpad for a stunning counter that broke Welsh hearts.

The passing from George Ford and Owen Farrell was textbook, enabling Daly to run on to the ball at speed and touch down in the left corner.

"I watched it about a million times afterwards, but I haven't watched it for a few years," Daly said.

When asked if it was his greatest moment in rugby, Daly replied: "I'd say so, so far.

"Just because of the timing of the game and where we were at the time. It is definitely up there, in the top one or two.

"I just tried to get back as quickly as possible from the kick and I realised Fordy was on his bike straight away, and I could see Faz there as well.

"So I knew a couple of passes were on the cards, and it was just nice that two pretty world-class passes put it in front of me and I didn't have to break stride and could run on to it."