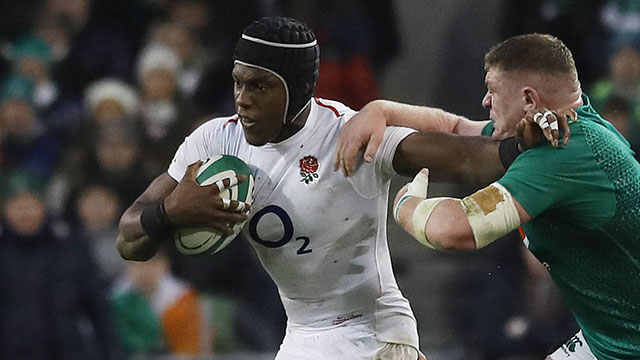 England hope that Maro Itoje will return in time to reinforce the final stage of their Six Nations title pursuit after being struck down by a knee injury.

Itoje will miss the clashes with France and Wales due to a grade two medial ligament tear sustained in the second half of Saturday's remarkable victory over Ireland at the Aviva Stadium.

But if his rehabilitation progresses well, the British and Irish Lions lock could be back for the last two rounds against Italy and Scotland.

Offsetting the news of his absence is the return to fitness of flanker Brad Shields, centre Ben Te'o and wing Joe Cokanasiga, who missed the stunning start to the Championship in Dublin through injury.

"Maro had the scan and saw a specialist yesterday (Monday). It's ligament damage to his knee," forwards coach Steve Borthwick said.

"We anticipate him being able to play at the latter part of the tournament. Hopefully he'll heal fast and we'll have him back ASAP.

"Which game that is for depends on how his rehab goes over the next couple of weeks, but we'd expect him to feature later on."

As cover, Itoje's Saracens team-mate Nick Isiekwe has been called into England's 35-man training squad that has assembled to begin preparations for Sunday's visit of France to Twickenham.

Courtney Lawes, who was a second-half replacement against Ireland, and Joe Launchbury are competing to fill the vacancy in the second row alongside George Kruis.

Itoje will remain at the squad's Surrey training base to continue his rehabilitation and in the meantime England must decide how to cover for the loss of a player who Eddie Jones believes will soon be recognised as the best lock in the world.

"Maro's a fantastic player and a great personality around the squad. Clearly it's significant that he's out, but we have a lot of brilliant players in his position," Borthwick said.

"You'll always miss a player of his calibre, you'll take some strength out of your team, but we have very good and experienced players to come in.

"It was a tough decision to leave Joe out against Ireland and he was brilliant in the way he supported the team, which is great credit to him.

"We all saw the impact Lawes had off the bench, the hitting power he has and how he can carry.

"We approach team selection by picking the team that we want to get the result for that weekend. We always look at different combinations and we'll be doing that over the next few days."

Itoje sustained the injury to his right knee in the second half of England's remarkable win at the Aviva Stadium when being cleared out of a ruck by Ireland flanker Peter O'Mahony.

He was ruled out for five weeks after suffering a chipped patella to the same knee in the build-up to the autumn series, playing throughout November until the nature of the injury was discovered.