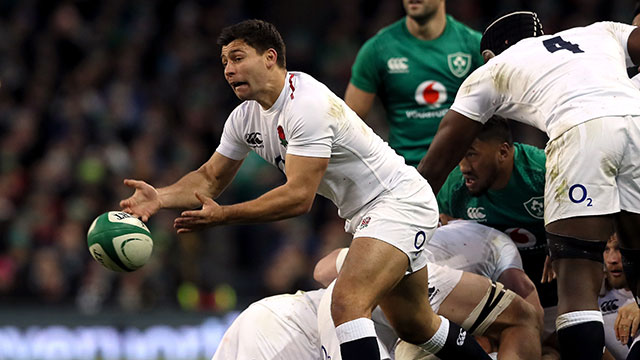 Ben Youngs claims England have produced the greatest rugby of the Eddie Jones era in sweeping aside Ireland and France.

Emphatic wins in the opening two rounds of the Six Nations have set-up a title showdown with Wales in Cardiff on Saturday week that will place the Grand Slam in the winners' sights.

Jones has masterminded 30 wins from 37 Tests as England head coach in a record that includes a Grand Slam, Championship title and 3-0 series whitewash of the Wallabies in Australia.

But Youngs believes that by amassing 10 tries in dominant displays at the Aviva Stadium and Twickenham, the team is scaling new heights.

When asked if England are playing at the highest level of rugby under Jones, Youngs replied: "From what I remember since I've been involved with Eddie, yes.

"It's probably not higher intensity, just more consistent within it. Maybe that's maturity, personnel - I'm not sure.

"It's certainly great fun out there. You can probably see it - from one to 23, guys are thriving and loving being part of the team.

"If you're 30-8 up against France at half time you are doing something right. There weren't many mistakes."

The biggest win over France since 1911 has cranked up expectation surrounding the February 23 showdown in Cardiff as England look to continue their stunning start to World Cup year.

Wales are the only other Six Nations team with a 100 per cent record after posting wins against France and Italy.

"Wales have had a good run. We are going to embrace and enjoy the big two-week build-up," Youngs said.

"This is what the Championship is about - it always comes down to certain games.

"France was a Championship decider, the same in a fortnight's time. We will take every game as it comes but certainly, this one is hugely exciting."

The only frustration to emerge from the Twickenham landslide was an ankle problem sustained by Mako Vunipola, with an update on the blockbusting loosehead prop's condition expected in the coming days.

Second row Maro Itoje has an outside chance of being available against Wales as he continues his recovery from a knee ligament tear, but hooker Dylan Hartley will miss out again because of a similar injury.

While England rampage through the Six Nations, abject France are in freefall amid demands for Jacques Brunel to be sacked.

Morgan Parra, the country's most capped scrum-half, has hinted at discord in the camp.

"I think that we are capable of doing what the English do, but are we working on this during training? I think we don't work on it enough, even not at all," Parra said.

"Yet these are very simple things that are today part of high-level rugby. We can do this. But do we work on it? No."