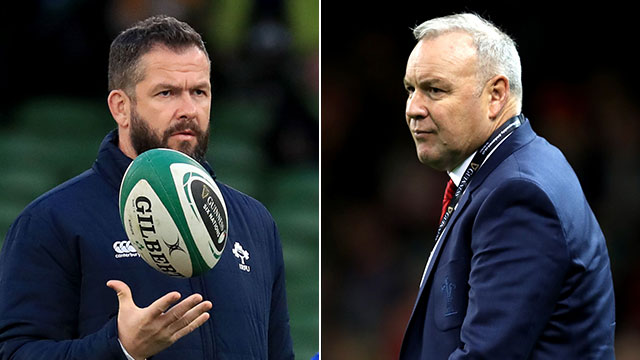 Ireland and Wales face a key game in terms of their Six Nations title ambitions when they meet at Dublin's Aviva Stadium on Saturday. Here, we look at some key talking points heading into the match.

Wales one win away from new Six Nations record

Wales are unbeaten in the tournament since Ireland defeated them in Dublin two years ago. Following that 37-27 loss, Wales have embarked on a run of eight successive Six Nations wins, equalling their best run in the competition that was set between 2007 and 2009. It comes following a 14-match sequence undefeated in all competitions under former head coach Warren Gatland, which briefly elevated them to number one in the world last year. Wales, unquestionably, have a winning habit.

It was all on the line for Wales in March last year, facing Ireland at the Principality Stadium with a Six Nations title and Grand Slam hovering tantalisingly close. Most pundits struggled to call it beforehand, but Wales never looked back once centre Hadleigh Parkes scored an early try, while Gareth Anscombe kicked 20 points in a 25-7 victory. It was comfortably more comprehensive than the scoreline suggests, as Ireland delivered one of their worst displays under Joe Schmidt. They were outclassed in every department, and Wales will hope the nightmare still lingers.

Nick Tompkins - the centre of attention

Saracens centre Tompkins has been promoted for his first Test start following a memorable try-scoring contribution off the bench in a 42-0 drubbing of Italy last weekend. He looked at ease in the international environment, but this weekend will be a considerable step up as he opposes a highly-experienced Ireland midfield pairing in Robbie Henshaw and Bundee Aki. If he goes well on Saturday, then Wales head coach Wayne Pivac really has unearthed a gem.

The opening round of this season's Six Nations showed exactly how tough it is to win away in the tournament, with England, Scotland and Italy all going down to defeats on their travels. Wales have found it tough going at the Aviva Stadium during recent seasons, suffering Six Nations losses either side of a draw in 2016. Apart from a World Cup warm-up victory there the previous summer, Wales have not triumphed on Irish soil since 2012, which underlines how big a task they face this weekend.

If anyone doubted the influence of Ireland captain Sexton and Wales talisman Biggar on their teams, then look no further than last Saturday's opening round of action. Sexton scored all 19 points in his team's victory over Scotland, while Biggar performed superbly against Italy, highlighted by him flicking an audacious pass between his legs for wing Josh Adams' second try. They have 169 caps between them for their countries and amassed a combined total of more than 1,200 Test points. Both nations would be lost without them, such is their enduring quality and match-winning ability.