Trio recalled as Ireland target a happy ending in Dublin 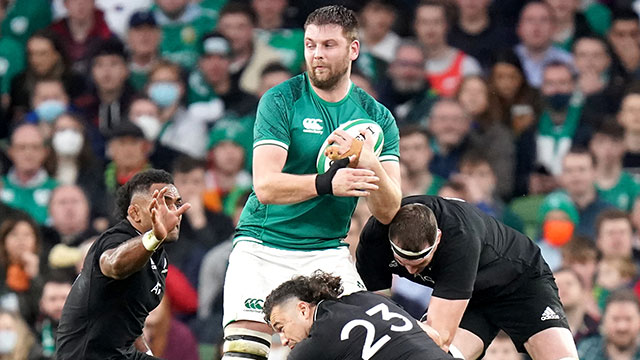 Iain Henderson, Jack Conan and Mack Hansen have been restored to Ireland’s starting XV for Saturday’s Six Nations clash with Scotland in Dublin.

Lock Henderson takes the place of head injury victim James Ryan, while Conan is preferred to Peter O’Mahony in the back row and Hansen comes in for Andrew Conway on the right wing.

Ulster captain Henderson, who has been handed his first start of this year’s championship, played 78 minutes of last weekend’s 32-15 win over 14-man England after vice-captain Ryan was forced off by the challenge which led to Charlie Ewels’ early red card.

With Ryan unavailable due to concussion protocols, Kieran Treadwell – who was on the scoresheet in the round-three win over Italy – will provide second-row cover from the bench.

Conan regains a starting role following two games as a replacement on the back of his try-scoring cameo helping the Irish to victory at Twickenham.

He will begin at number eight, pushing Caelan Doris to blindside flanker, with O’Mahony dropping to the bench.

Australia-born Hansen was not involved in London but has been brought back in the other change to Andy Farrell’s starting line-up as Conway has a knee niggle.

Ireland host the Scots at the Aviva Stadium seeking a minimum of the Triple Crown.

The Irish also retain hope of the championship title but are reliant on a favour from England against Grand Slam-chasing France in Saturday’s evening kick-off in Paris.

Despite repeated struggles at the scrum against Eddie Jones’ side, head coach Farrell has stuck with an unchanged front three of Leinster trio Cian Healy, Dan Sheehan and Tadhg Furlong.

Henderson and Munster player Tadhg Beirne will resume their second-row partnership, lining up ahead of Doris, Conan and Josh Van Der Flier.

The return of Hansen is the only alteration among the backs as the hosts go in search of a seventh successive win over the Scots.

Captain Johnny Sexton will move level with John Hayes’ as Ireland’s joint sixth most-capped player on the occasion of his 105th Test in the green jersey.

The influential fly-half will continue his partnership with Jamison Gibson-Park, while Bundee Aki and Garry Ringrose have once again been given the nod ahead of Robbie Henshaw in midfield.

James Lowe – the championship’s joint leading try scorer – has been retained on the left flank, with Hansen on the right and Hugo Keenan set to continue at full-back.