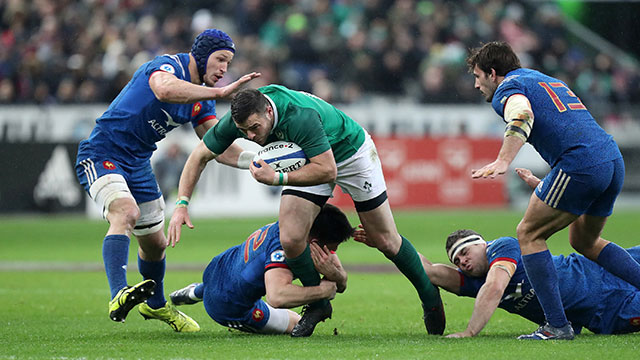 Six Nations bosses have announced a review into "a number of incidents" relating to head injury protocols in Ireland's 15-13 win over France in Paris.

France boss Jacques Brunel insisted this was ordered by the independent doctor at the Stade de France match, and that Les Bleus had no control over the issue.

Former Ireland skipper Brian O'Driscoll was among those who questioned the fairness of the decisions.

O'Driscoll tweeted: "Just because we won with an INCREDIBLE 42 METER drop goal that HIA decision shouldn't get swept under the carpet. It was nothing short of a disgrace!!!"

On Sunday, the Six Nations announced in a statement: "The HIA review processor is reviewing a number of incidents from the France v Ireland match in the senior men's championship.

"Depending on their findings, Six Nations Rugby Limited (SNRL) will be considering the next steps in respect of those incidents.

"SNRL has in place a head injury assessment protocol that applies to the 2018 championships, which has been approved by World Rugby. As part of that protocol there is a process by which HIA/concussion-related incidents are reviewed.

Johnny Sexton's overtime drop-goal handed Ireland a win they appeared to have thrown away, after Teddy Thomas' converted try edged Les Bleus into a 13-12 lead late on.

Replacement fly-half Anthony Belleau converted Thomas' try – and then missed a testing penalty shot at goal that could have secured France the victory.

On his return to the field in the wake of the HIA for Dupont, however, he then did not attempt another shot at goal.

In Saturday night's post-match press conference, France boss Brunel insisted Les Bleus had no control over either Dupont or Jalibert being removed for head injury checks.

"They were collisions, but the head injury protocol was decided by the independent doctor; it wasn't our decision," said Brunel, of the HIAs for Jalibert and Dupont.

"Both players had knee injuries, but the independent doctor decided that by the protocol."